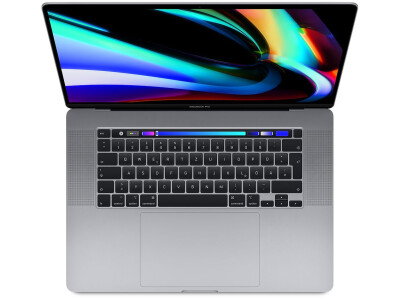 Great joy in the fan base

The manufacturer would probably never admit it publicly, but it has learned from its mistakes. The new keyboard is actually old hat, but it works great. The screen is now a little bigger. The performance has increased. The price is not excessive by Apple standards. We are therefore sure: professionals and those who want to become one will snatch this notebook from Apple’s hands. The 16-inch MacBook Pro is like a best-of album from Apple’s recent notebook past. Only those who had hoped for easier maintenance / expansion options will be disappointed.

The addition “Pro” is currently very popular with Apple. At the iPhone 11 Pro and especially in the case of AirPods Pro the term rather confuses. Here, in what is currently the largest of all MacBooks, it seems to be appropriate. After all, the manufacturer puts everything that is dear and expensive in the unibody, which is still made of finely machined aluminum.

Note: We started writing this review right after Apple handed over the test device. The report will be gradually updated and additional impressions will be added. We also deliver benchmark results and battery life values ​​promptly.

We don’t need to say a lot about workmanship and design. There are no radical changes to the housing; The processing quality of the MacBooks has long been no reason to complain. The MacBook Pro 2019 has become a bit thicker, which, according to Apple, benefits heat management, among other things. But let’s get into the exciting questions about the latest MacBook Pro.

No more “butterfly effect”: This is how it is typed on the new keyboard

We can understand it. All those who struggle with the keyboards of the current MacBooks. In the test of the MacBook Pro series, we got along with the short travel and the typing experience that took some getting used to, most recently with the Review of the revised MacBook Air or that MacBook Pro 13 from 2018. But there are a lot of loyal Apple customers who see things differently. They can breathe a sigh of relief, because Apple said goodbye to the butterfly mechanism introduced in the 12-inch MacBook in 2015. Keys with the well-known scissor mechanism now spread out under the fingers of the MacBook Pro 16 “owner.

The repair service iFixit has the MacBook Pro with a 16 inch display taken apart in a teardown and found that the new keyboard mechanism is similar to Apple’s desktop keyboard called Magic Keyboard. Components should even be identical. So a modular keyboard. Why not? You don’t always have to be forced to reinvent the wheel. In principle, the buttons can even be removed quickly, for keyboard cleaning. Will there soon be individual replacement keys available in the Apple Store? The manufacturer decidedly negative to this question to netzwelt.

The touch bar remains, fortunately not the arrow keys

If you want to buy a MacBook Pro in 2019, you have to get one with a Touch Bar. With the new addition, the touch-sensitive OLED strip shrinks a little because Apple has now installed a physical escape key again. This will also please many users. We consider the arrangement of the arrow keys to be just as important. On the predecessor and on all other MacBook Pro models, the keys are quite close together, which can be annoying when you scroll through the pages. Not so with the test device: Here Apple positions the arrow keys in the form of an upside-down “T” with sufficient space to each other. Neither change is dramatic, but an increase in comfort in everyday life.

The MacBook’s trackpad is considered the benchmark among touchpads. The test device shows why this is so. The gigantic glass surface always reacts as you would expect. The fear of incorrect entries – for example by accidentally touching the ball of the hand while typing – is unfounded, the gliding properties are excellent. However, there are no changes to report compared to the predecessor in this regard. We stick to the statement made in other MacBook tests: If you have such a trackpad, you can easily get over the lack of a touchscreen option.

Battery life: more is not possible

The case of the 16-inch MacBook is very similar to that of the no longer available 15-inch model. Thanks to numerous optimizations in the interior, the iPhone manufacturer found space for a larger battery. The battery now has a capacity of 100 watt hours. Perhaps there would have been room for an even larger battery, but Apple decided against it with a view to US airline regulations. Laptops with lithium batteries beyond the 100 watt hour limit are simply not allowed to use the carry-on baggage be transported by plane in checked baggage.

We’ll look at the MacBook Pro 16’s battery life in more detail shortly and see if Apple’s stated runtimes are realistic. The scope of delivery includes a powerful USB-C power supply with 96 watts.

The “big” MacBook Pro is often bought by the media. Sensible speakers are also part of good sound for other target groups. The 16-inch MacBook Pro delivers that. Apple accommodates six speakers in the case, which can sometimes make you forget for a whole movie evening that you are sitting in front of a notebook. The maximum volume can be reduced with cheaper Bluetooth speakers keep up; there is no distortion or oversteering.

According to Apple, the microphones have been revised, three in number. They are located in the left part of the housing and are intended to prevent the noise in difficult recording situations. In a test video call via Skype, our counterpart praised the clear voice quality. The webcam still has a relatively weak resolution of 720p. An update would have been welcome here. Provided there is sufficient brightness, the image is usable and low in noise.

Only when you take a closer look does it become apparent that Apple has reduced the edges of the screen in order to transform the 15-inch MacBook into a 16-inch MacBook. Compared to the 15-inch device, they are really narrower, but still considerably thicker than, for example, a Dell XPS or other notebooks.

On paper, the display itself is not a revelation with a maximum brightness of 500 nits and a resolution of 3,072 x 1,920 pixels. In practice, however, there is nothing to complain about. The display shines brightly and is easy to read even in direct sunlight. We cannot see any annoying halos when displaying flat white.

Of course, the screen supports those from the iPad Pro range Well-known True Tone technology, in which the white balance runs automatically and continuously in the background and colors are displayed very realistically in this way.

Even the standard configuration of the MacBook Pro 16 “is impressive, although it is likely to be too weak for” real “professionals. Apple always installs at least 512 gigabytes of SSD capacity and 16 gigabytes of DDR4 memory in the entry-level device you can choose from this variant of the Intel Core i7 with six cores (Turbo up to 4.5 gigahertz fast) or the Intel Core i9 with eight cores for an extra charge. With these two variants, Apple uses AMD Radeon Pro 5300M graphics chips with four gigabytes of their own GDDR6 memory or optional AMD Radeon Pro 5500M with twice the video memory.

The Apple Store has further configuration options available. If you have enough change, you can SSD storage raise to a proud eight terabytes. All variants have four Thunderbolt 3 ports in common. You won’t find any SD card slots or other ports on the MacBook Pro.

The MacBook Pro with 16-inch display costs at least 2,700 euros in the basic configuration. The versions with a Core i9 CPU start at 3,200 euros. If you overdo it, order around 64 gigabytes of RAM and 8 terabytes of SSD capacity, you will quickly end up at over 7,000 euros.

Don’t you agree? Are you looking for suitable alternatives? We have an extensive list of Apple MacBook Pro 16 “alternatives for you in ours Notebook-Overview ready.

Redmi 9: You can buy the popular Xiaomi mobile phone today for only 90 euros

Apple HomePod: You should grab this Saturn offer immediately

Apple AirPods Max in the test: press review – “Sony and Bose can pack up”

Apple: Can Fitness + also be used in Germany?