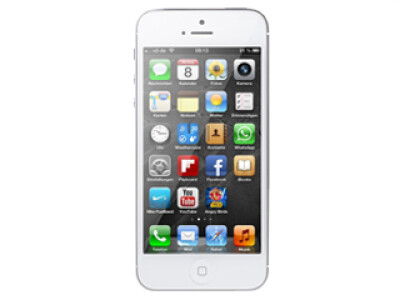 The Apple iPhone 5 is the best iPhone so far. However, it is not so clear whether it is currently the best smartphone. An all-important function with which the device leaves the competition is missing. It is rather the overall concept of perfectly coordinated hardware and software and the ecosystem that promotes the iPhone 5 to the top.

A larger retina display and support for the new LTE cellular standard are the biggest innovations in the sixth generation of iPhones. Will you catapult the Apple iPhone 5 back to the top of the smartphone world?

At first glance, the Apple iPhone 5 does not differ much from its predecessor. Or can you tell a 3.5 inch and a 4 inch display apart from a distance? Even in the hand, the difference is hardly noticeable, after all, the width of the iPhone has remained unchanged. The iPhone 5 is just as comfortable in the hand as it has ever been.

What users will notice when they first come into contact with the new Apple cell phone, however, is the significantly lower weight. Despite high-quality materials such as glass and metal, the iPhone 5 hardly weighs more than a 99 euro smartphone. The engineers from Cupertino are leading similarly to HTC with One S the rule of thumb “higher weight = higher quality product” ad absurdum. For some Apple fans, the iPhone 5 might be too light. Buyers of an iPhone 5 should also take a critical look at their smartphone after unpacking. More and more on the net Manufacturing Defect Reports.

Even if Apple does not go radically new ways with the form factor and the design language, the new design offers a number of welcome minor changes. For example the new, much smaller Lightning connector, which makes the design look a lot more modern. Hand on heart: The 30-PIN Dock Connector had the grace of a parallel interface. The fiddling around until the correct plugging direction is found has finally come to an end.

However, the new connection makes many accessories unusable. Although offers Apple offers appropriate adapter solutions for an additional charge, however, these do not make all accessories compatible with the new iPhone. Because Apple has also made changes to the headphone jack. It is now on the bottom instead of the top of the device. The change in position means that the connector in some iPhone 4 / 4S car mounts is covered and cannot be used.

The voice quality is very good and is on par with the competition, the Samsung Galaxy S3 and HTC One X. Interfering noises are barely noticeable and the callers can be heard well even in noisy environments. The iPhone 5 is also suitable for hands-free calling, but the voice quality drops a bit here.

Comparison of iPhone 5 and iPhone 4S

It should be noted that the iPhone 5 uses a new type of so-called nano SIM card. Conventional mini or micro SIMs do not fit into the iPhone 5. Nano SIMs are not yet available from all mobile network providers; you can find an overview of the availability from various mobile network providers here. For existing customers this also sometimes applies an exchange fee an.

Apple promises a battery life of up to eight hours when making calls or surfing in a 3G network, and it should even be possible to surf the net for up to 10 hours via WLAN. A significant improvement over its predecessor, where many users use the complained about low battery lifeso that Apple touch up had to.

In the practical test, the battery life was at the level of the predecessor, netzwelt could not see a significant increase. Depending on the intensity of use, users should be able to get by on one charge for one to two days.

The retina display of the iPhone 5 has lost none of its quality despite being enlarged to four inches. The display is bright and razor-sharp, colors appear strong, but still natural. A wow effect like in 2010 with the iPhone 4 no longer occurs, after all, the competition has long since followed suit.

The A6 processor, about which Apple only said a few words at its keynote, is more impressive. It provides a significant increase in speed compared to the iPhone 4S and even outshines quad-core CPUs in some benchmarks – especially in terms of website structure, the iPhone 5 is superior to the competition, as the Sunspider and Browsermark tests show. There was also no excessive heat development in the test, even during prolonged gaming.

Note: Sunspider and Browsermark measure website building performance. The Geekbench determines the performance of the processor and memory. Except for the Sunspider benchmark, higher scores meant better scores in all benchmarks.

In contrast to the flagships of the competition, users have to do without the near field communication standard (NFC). Apple sees no reason why such a chip should be installed. Cupertino is also rather critical of wireless charging technology. Technically speaking, there are no innovations hidden inside the iPhone.

The iPhone 5 already supports the new LTE cellular standard, but in Germany LTE can only be used with the iPhone 5 in the network Deutsche Telekom – and only in 61 cities at the moment. In rural areas, Telekom’s LTE network uses a different frequency that the iPhone 5 does not support. This leads to paradoxical situations: Telekom customers in a village in Mecklenburg-Western Pomerania, for example, cannot surf LTE with their iPhone 5, despite a corresponding 4G network.

In view of these restrictions, the 4G Internet connection is not a killer feature. Especially since the top speeds in netzwelt’s practical test were still comparatively low. In the Hamburg LTE network, the iPhone 5 only achieved a maximum download speed of 14.82 megabits per second.

The Apple iPhone 5 comes with the factory iOS 6 fitted. Unlike the iPhone 4S, the range of functions does not differ from the version that Apple also used for its predecessor provides as an update, iPhone 5 exclusive features are missing. The only differences are due to the hardware of the new Apple cell phone, such as the larger display. However, Apple is not very creative when it comes to more screen space: the home screen is expanded to include a number of icons. In-house applications have also been re-scaled.

From a status bar or the like no trace. It remains to be seen whether app developers can come up with something more creative here. The Apple developer community has only had a week to adapt its programs to the larger display. You can find an overview of games optimized for the iPhone 5 here.

It should also be mentioned that Apple relies on tried and tested Google services for iOS 6 waived. YouTube is on the iPhone 5 and Co. in Germany currently only via the browser available, as well as Google Maps. Apple has replaced the map application with its own service, According to user reports, it is still very buggy.

There are also gaps in the new functions of the Siri voice control: For example, sports fans can now have the results of their favorite team announced. However, this only works with teams from the 1st Bundesliga, Siri does not know the results of the lower leagues and the assistant also has to pass other sports such as basketball or ice hockey.

Apple has only made minor changes to the rear camera compared to the iPhone 4S, but the iPhone 5 can still claim its place among the best camera phones. A detailed test of the camera and a comparison to its predecessor and the competition HTC One X and Samsung Galaxy S3 do you think …? Find here. On the other hand, Apple has tuned the front camera: It now records videos in HD and the new position also makes it easier to shoot self-portraits.

The iPhone has long outstripped the iPod as a music player, and the iPhone 5 also shines again with a sound quality at MP3 player level, regardless of whether the user is using it for background sound or is listening to music through headphones. The iPhone 5 also comes with new headphones, called Earpods. Thanks to their changed shape, they should provide a better sound and more comfort, which a short test by netzwelt could only partially confirm. Owners of older i devices can purchase the Earpods for 29 euros in the Apple Store if they wish.

Tips, tricks, comparisons and tests for the iPhone 5

Here you will find Information on the successor, the iPhone 5S.

Don’t you agree? Are you looking for suitable alternatives? Below are the best Apple iPhone 5 alternatives.

Apple AirPods Pro: At Saturn the cheapest and with free addition

Apple iPhone 4S in the test - All data and prices

Order deadlines for Christmas 2020: Your gifts will arrive on time

so you can unlock the secret menu of AirTags!

Google is considering an anti-tracking tool for Android