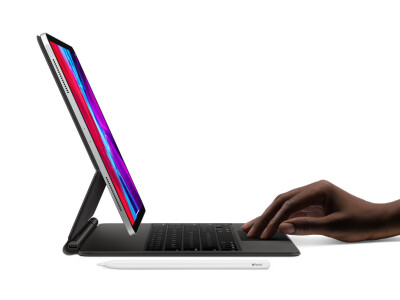 Almost a pro and for many the ideal iPad

The iPad Air 2020 is almost a pro. Design, performance and mobility are convincing and there are relatively few compromises compared to the iPad Pro. Creative people are better served with the Pro due to the additional performance. If you are simply looking for a powerful tablet with a great, borderless display, the iPad Air is the right address.

The iPad Air 2020 is breaking new ground. So far, if you saw the similarity to the regular entry-level iPad with the airy, light iPad, the relationships are now clearly changing. The iPad Air becomes the iPad Pro, at least visually, but otherwise – almost.

Anyone who has so far opted for a Pro model because of the rimless design will now think twice. Because the iPad Air costs significantly less and, as this test will show, only makes few compromises.

Face ID, where are you?

If you look at the 11-inch iPad Pro and the iPad Air 2020 from the front, no differences are noticeable at first glance. Then already on the second. The bezels of the Air are slightly wider, which means that the tablet is “only” 10.9 inches. What else do you notice? There is no trace of Face ID anywhere.

Where the TrueDepth camera and an additional microphone are located on the iPad Pro, there is only a single lens on the iPad Air – the front camera. Face ID? Unfortunately not. Instead of facial recognition, Apple relies on the tried and tested Touch ID. However, this is not used as usual in the home button, but in the power button.

This is noticeably larger than the iPad Pro and is no longer made of metal, but has a glass surface. Despite the significantly smaller dimensions compared to the home button, unlocking works quickly and reliably as usual. So you don’t have to make any compromises here.

At first glance, there are hardly any differences in the display. The iPad Air with 500 nits is slightly darker than the iPad Pro with its 600 nits. What is also missing from the Air is that ProMotion-Technology with a refresh rate of up to 120 Hertz.

The brand new iPad Air 2020 from Apple is here. This is what the tablet looks like.

So if you scroll quickly or jump back and forth between two pages, the display cannot show this as smoothly as it is the case with the Pro model. That said, the screen is superb and offers like the Pro True Tone.

As a result, the tablet adapts colors to the respective environment so that they are always displayed correctly. And you don’t have to do without the large P3 color space, which is ideal for image editing.

In addition to the lack of a TrueDepth camera, the differences between the iPad Pro and iPad Air 2020 seem small at first glance. Frame and back are made of 100 percent recycled aluminum like the iPad 2020. The device dimensions are identical to the Pro except for the depth. The Air is 0.2 millimeters thicker, but weighs 13 grams less.

There are clear differences in the number of microphones and speakers. The iPad Pro has a total of four microphones built into the frame and on the TrueDepth camera, the iPad Air only has to get by with a single one – next to the microphone of the main camera on the back.

Both tablets have four speaker grilles embedded in the device frame, but the iPad Air 2020 only has two speakers, while the iPad Pro has four speakers. After all: music, films and the like are reproduced in stereo, the sound is good and sufficient.

Incidentally, there is no longer a headphone jack. Here you have to Bluetooth headphones or those with a USB-C connection.

If you look at the back of the iPad models, you can see the biggest difference: no dual camera, no flash, no LiDAR, just a 12-megapixel wide-angle camera with a 1.8 aperture.

The iPad Air is therefore not a photo miracle, but in direct comparison with the iPad Pro 2018, photos looked a bit more contrasting and a tiny bit less noisy. Good shots are possible as long as the lighting conditions are right.

The front camera has a resolution of seven megapixels. For FaceTime or video telephony in general, this is sufficient, but only to a limited extent for selfies. The qualitative difference to the iPad Pro is enormous. The Pro’s front camera is significantly better.

Since the iPad Air lacks the TrueDepth camera, there is no portrait mode in the camera app. Also Animoji and Memoji you cannot use it. However, this should be negligible for most users.

Im iPad 2020 the Lightning connector is still used, the iPad Air, on the other hand, is like the Pro series USB-C – enjoyable! As with the predecessor, there is a Smart Connector for accessories, but the new generation has a decisive advantage.

In the past, every model series had its own accessories except for the Apple Pencil. The iPad Air 2020 is now compatible with all iPad Pro accessories. You can use the Apple Pencil 2 that Magic Keyboard as well as the Smart Keyboard.

This makes the differences to the iPad Pro even smaller and the iPad Air much more powerful than its predecessors.

Performance: What does the A14 Bionic Chip do

Not much needs to be said about the performance of the A14 Bionic Chip. The tablet is fast. According to Apple, the processor is a good 40 percent faster than its predecessor and the graphics 30 percent faster.

In a comparison with the benchmark program “Geekbench“In the processor comparison in the single-core test (single-core load), the iPad Air easily outperforms the iPad Pro from 2018 and 2020, in the multi-core comparison (multi-core load), however, it is clearly behind both Pro models, the graphics performance is also lower.

We compared the iPad Air 2020 with the iPad Pro 2018. On the left you can see the performance points of the Air, on the right of the Pro. More points mean more performance. We did not perform a benchmark test when testing the iPad Pro 2020, but the values ​​are very similar to those of the previous model.

Anyone who works creatively with the iPad and has a lot to do with video editing, image or audio editing is better off with the iPad Pro. The lead in performance is noticeable in this area. Just as an example: Exporting a 4K video with iMovie is much faster on the iPad Pro than on the iPad Air.

In terms of battery life, there are no differences between the iPad Air and the iPad Pro. The uptime for video playback or web browsing WLAN Apple says it takes up to ten hours, nine hours if you surf the web using mobile data.

Of course, the running time also depends on the brightness settings of the display and the volume of the sound output. Nevertheless, the information from Apple’s data sheet is usually not exaggerated and achievable.

Who is the iPad Air for?

If you are looking for a powerful tablet with a largely borderless display, then the iPad Air is exactly the right choice for you. If you can do without Face ID and do not do video editing or other computationally intensive creative tasks with the iPad every day, the iPad Air is completely sufficient – especially since the tablet is significantly cheaper than the Pro series.

You can buy the iPad Air in the colors silver, space gray, rose gold, green and sky blue. The prices are 632.60 euros for the WLAN version with 64 gigabytes of storage and 769.10 euros for the WiFi + Cellular version. If you need more storage space, a variant with 256 gigabytes of storage is also available. For this you pay 798.35 or 934.80 euros.

Don’t you agree? Are you looking for suitable alternatives? We have an extensive list of iPad Air (2020) alternatives for you in ours Tablet-Overview ready.

HomePod Mini in the test: Apple makes it under 100 euros

Apple Watch 5 falling in price: The smartwatch is getting cheaper

Apple AirTags: finder is about to be released