Announced at the same time as the Samsung Galaxy S21, the Korean manufacturer offers its new true wireless headphones. Here is our review of the new Samsung Galaxy Buds Pro.

Announced at the same time as the new Samsung Galaxy S21, Samsung’s new true wireless headphones are intended to be the ideal companions of the Galaxy S21. With a more classic design than the Galaxy Buds Live, the new Galaxy Buts Pro obviously offer active noise cancellation which promises to be more efficient thanks to the intras type design. We spent a few weeks with these new headphones, here is our opinion on the Samsung Galaxy Buds Pro. 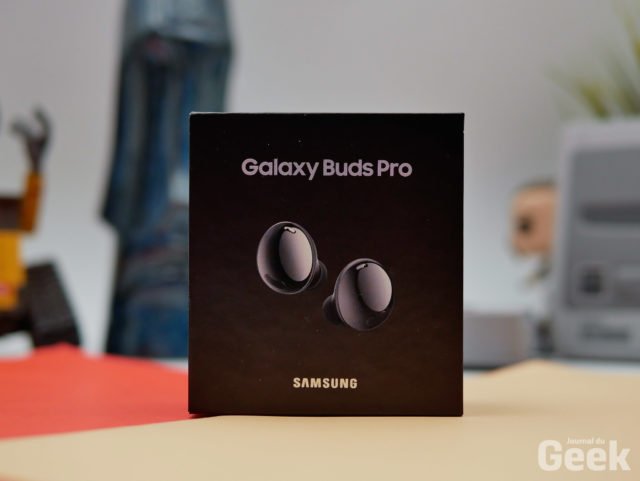 Overview and specifications of the Samsung Galaxy Buds Pro

Since the acquisition of the AKG brand, Samsung has been very active in the world of portable audio and even more in the sector of true wireless headphones. Indeed, we had first the Galaxy Buds, then the Galaxy Buds +. Arrived after the Galaxy Buds Live with a super original design but rather convincing performance for open headphones. With the Galaxy Buds Pro, the Korean manufacturer has returned to a much more classic in-ear design. First advantage, we thus recover a more effective passive insulation against external noise. Suddenly, with active noise cancellation, Samsung offers a much more convincing solution. While Bose or Cambridge Audio often offer fairly large headphones, the Samsung Galaxy Buds Pro are super discreet and go unnoticed. 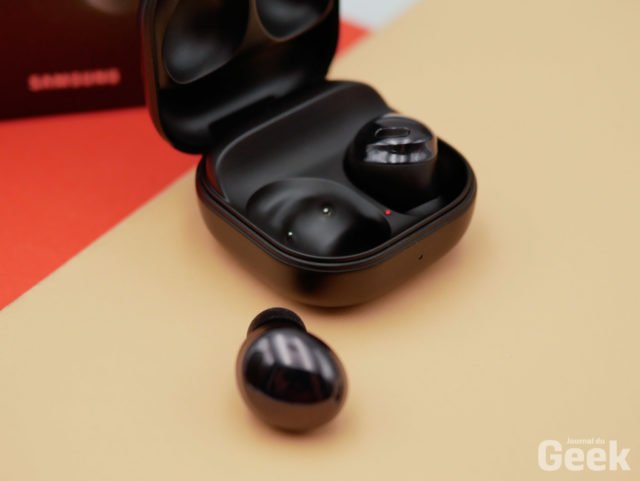 They barely come out of your ears, we are far from Sony WF-1000XM3, Technics AZ-EZ70 ou encore Sennheiser Momentum True Wireless 2. While we were used to the Bose QC Earbuds and therefore show that we did have headphones, with those from Samsung, if we didn’t pay attention, we wouldn’t see them. In addition, we do not find the small stick of AirPods for example, which maximizes this discretion. On the Samsung Galaxy Buds Pro, no small fins like on the Google Pixels Buds, the very rounded design allows the headphones to fit perfectly in the user’s ear. As usual, we obviously advise you to test them before if possible but on our side, we have not noted any particular concerns. In our tests, we were lucky to be able to usually be satisfied with the Medium tips, which was not the case with the Galaxy Buds Pro on which we had to change to Large tips. Note that the nozzle is very important insofar as it can impact noise reduction. And finally, on a daily basis, the Galaxy Buds Pro are very comfortable and are quickly forgotten. 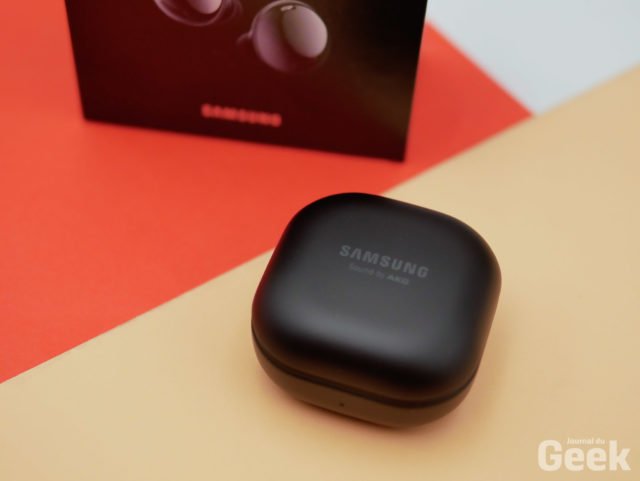 The whole thing is super light, as is the storage case which is discreet and small. This is the kind of case that can be left in the pocket and that the latter will not deform. No pairing button on the box and if you want to pair the headphones with a new device, you will have to put them in your ears and press the two sensitive buttons for 3 seconds. 2020 requires, it is recharged wirelessly and obviously recharges the headphones. And speaking of charging, the Galaxy Buds Pro last around 5 hours with noise reduction active and around 8 hours without. The box allows 2.5 recharges which brings to 13h (or 20h) in addition, it is quite sufficient even if we would undoubtedly have liked a bigger autonomy with the reduction of noise. 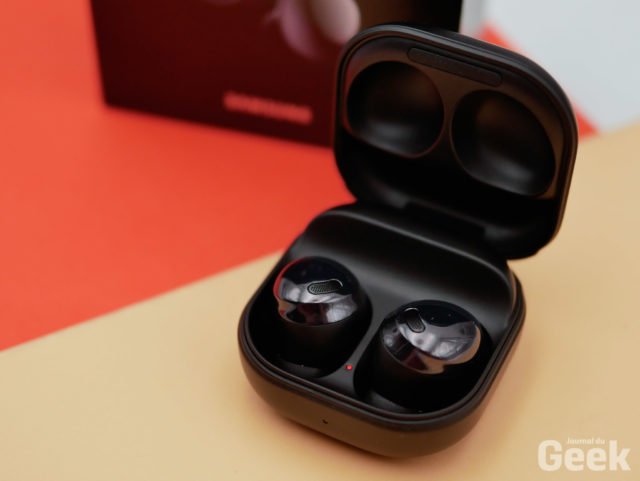 Since the beginning of the Galaxy Buds adventure, there have been no physical buttons and you will have to get used to the sensitive buttons on each of the headphones. The controls are classic in their functions but we found them to be somewhat too sensitive so that when trying to adjust the headphones, we can mistakenly mute the music for example. When you know it, it’s not too serious in itself but it can be annoying at times. Obviously everything is configurable from the Galaxy Wear application on Android. Note that the iOS application was not updated during the writing of this test and if we were able to pair the Galaxy Buds Pro with an iPhone, we could not make the settings.

And finally, we will note that if the Galaxy Buds Pro are not really multi-point, they can connect to several Galaxy devices. Unfortunately, even after multiple updates, I never managed to switch Bluetooth from Galaxy S21 Ultra to Galaxy Tab S7 + and vice versa.

The Samsung Galaxy Buds Pro are presented as in-ear and once in the ears, we notice that they do not fully fit into the ear canal. It is an assumed choice of Samsung. Suddenly, they may not hold in some. Typically, on our side, we found for example that the Galaxy Buds Plus held up better. In all cases, as we said above, there could be some fluttering, whatever the tip that was used. As a result, active noise reduction may be less effective. So, we put more or less compatible Comply tips and it was day and night, which allowed us to properly test the noise reduction. Suddenly, we can say it, it is effective and at the same level as AirPods Pro for example. This is not the best noise reduction on true wireless (Coucou Bose) but it is more than sufficient in everyday life, especially at the moment.

And because we are in 2021, which says noise reduction also says Ambient mode and on this point, Samsung is doing very well with relatively natural sound, very similar to what Apple offers with its AirPods Pro. You can also adjust the level of Ambient mode. As with Sony, the Galaxy Buds Pro can understand when the user is talking and thus automatically switch to Ambient mode and mute all music. With no less than 3 microphones, the sound of the voice is very good for the interlocutors. 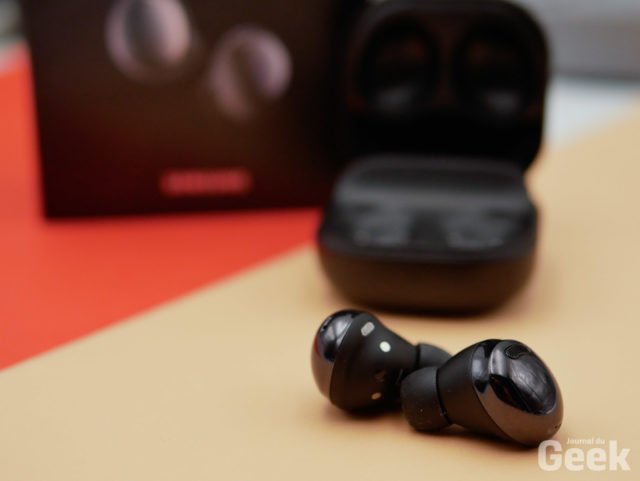 Since the first Galaxy Buds, it can be said that Samsung has taken a leap forward with each iteration and yes, the Galaxy Buds Pro sound great to the ear. Compared to Buds Live, the sound is more enveloping and above all, the bass is much more present without being intrusive. At times and depending on the songs you listen to, the sound may lack details (on some very specific titles by Marcus Miller for example) but overall, we were very happy with the performance of Samsung’s latest true wireless headphones. Note that the headphones have been tested on the standard profile that you can change in the application to refine the sound according to your preferences.

And finally, because Samsung sees only Apple as a competitor, the Galaxy Buds Pro offer 360 audio. The technology is called 360 Audio and is based on Dolby Head Tracking technology. On the other hand, it will only work on the Samsung Galaxy, something we have not yet been able to test for lack of content.

Galaxy Buds Pro are already available from most retailers at a price of 229 euros.

A new way to charge our virtual reality glasses