While the series inspired by The Karate Kid is in its third season, a mobile game arrives on March 19 and uses the codes of the series in a card game and karate combat. 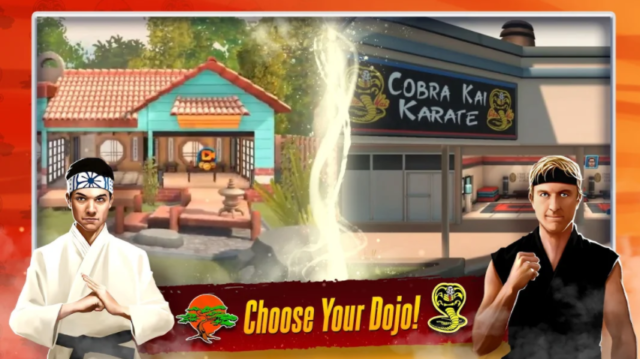 After the release of the event series Cobrai Kai, a mobile game inspired by the series is on the way. Cobra Kai : Card Fighter is a mobile game, and it will be available on March 19. An official trailer has also been unveiled which allows you to see how the game works as well as its graphics and mechanics. It is a hybrid between card game and fighting game in which each card determines an action. The story of the game echoes that of the series. The eternal rivals Daniel LaRusso and Johnny Lawrence have opened their karate school. At the start of the game, the player will have to choose which school they want to study karate at. The two dojos differ in the way they teach the discipline. Over time, you can become a teacher yourself and find new students to teach them special attacks. Artificial intelligence will be available for you to practice.

The form of combat resumes that of mythical fighting games like Tekken, although the viewing angle appears mobile and not static. Cards can be upgraded to have more power of action. You will be able to use your upgraded cards in weekly and monthly online tournaments to earn experience points and special prizes. Other characters from the series will be there, such as Eli “Hawk”, Robby, Samantha, Miguel or Demetri. Cobra Kai : Card Fighter is a completely free game but which will have optional paid items. Until it comes out, you can still watch the third season of Cobra Kai which is currently available on Netflix.

Skype prepares blurring of backgrounds and other functions for Android

where to watch the advertisements shown during the event?

An update has been received for Galaxy Buds Pro again

Covid 19: do you really have to wear two masks?

Facebook tries to convince iOS users to agree to be tracked