DZH Dynamics is the name of a project formatted by a group of young people who have the purpose of creating a company related to the aerospace sector, more specifically in the creation of satellites to take to space.

They have the help of ESA (European Space Agency) and will participate in the event Fly your thesis, in which they will get on a plane that will go into 0 gravity so they can test their prototype satellite.

I have spoken to them to find out more, and it seems we will hear about them quite a bit in the future.

What is DZH Dynamics? Who is behind?

DZH Dynamics is a multicultural research group made up of PhD and Master students, as well as young researchers who are passionately working on the development of one of the first satellites with inertia control through mass distribution control.

The team has been working since 2019 on developing the technology to finally test it under microgravity conditions.

Our objective therefore is to achieve, thanks to the dzhanibekov effect, that the current satellites by means of the distribution of the masses that they have inside (all the mechanisms, cables, etc.) are able to move through space without the need for any type of external help, such as propellers, mechanical wheels, etc.)

The effect describes the following:

an astronaut in space takes a T-shaped crank and rotates it on his trunk, it begins to rotate, but suddenly it changes and turns 180º on its plane of rotation, in order to stay for a few moments and then return to its position, and so on until the end of time.

In this video you can see in detail:

For this reason, the objective is to be able to control this continuous and infinite movement that arises from the nature of objects in 0 gravity and to make current satellites benefit.

Why do satellites need to be improved? What problem do they currently have?

Satellites move using various ways, there are the so-called reaction wheels, which is a type of wheel used in a space vehicle to change its angular momentum. But the problem that arises here is that to move that wheel requires a use of energy, the improvement that is achieved thanks to our idea is that, for example, we will be able to increase the capacities of a nano-satellite through a technology that consumes less energy , allow more powerful payloads for a given mission, make maneuvers faster because what provides the Dzhanibekov effect is that there is a stabilized spin by “nature”, so it is not necessary to make continuous corrections.

In summary, what we will improve will be the efficiency of the current satellites, since they will consume less energy, they will be more effective in their maneuvers, and they will be able to do new activities that they could not do before due to their limitations.

What kind of support have you received to move forward? 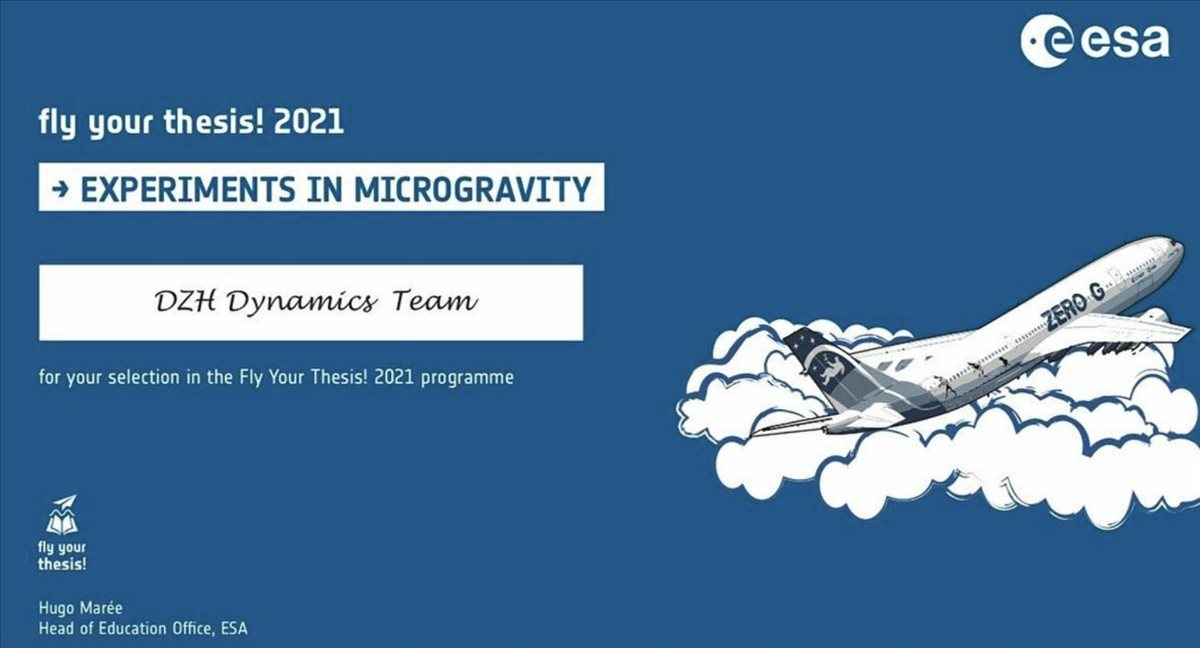 We currently have 3 initial sponsors ACATEC, MAXON, SENSING, who have provided us with essential materials for the future construction of the prototype and its facilities to be able to work with them.

What are the challenges that you have already overcome?

The elaboration of a 3D computer prototype has been our greatest achievement, which has been accepted by ESA (The European Space Agency) and now with the idea of ​​increasing the maturity of the project, the DZH Dynamics team has been selected by the European Space Agency to participate in the Fly Your Thesis! program. In this program we will have the opportunity to test the technology under microgravity conditions in the parabolic flight scheduled for October 2021, thus allowing them to increase the level of maturity of the technology.

which is our business model?

The business model once the prototype has been tested in gravity 0 and it works, would be on the one hand to sell complete satellites or on the other hand to sell to companies in the aerospace sector the idea that thanks to the incorporation of our system in their satellites, they can reduce energy costs and ultimately make their satellites more efficient.

Are there many people in the world doing something similar?

Currently we are the only ones who, thanks to the DZH effect, or tennis racket theorem, which is a 180 degree change of attitude, fast, periodic and absolutely customizable, which is obtained when the system is rotating around its intermediate axis of inertia. This effect can be used as a passive heat dissipation system or for efficient attitude changes in combination with current reaction wheel technology.

Satellites that have full control of their mass distribution are destined to be state-of-the-art in space applications. Of all the benefits that this technology allows, the DZH effect is one of the most prominent.

What are your next steps?

The first step will be to create the physical prototype and thus be able to test it in 0 gravity, since that is where it will work, in space.

Subsequently, if everything goes according to plan and our system works in 0 gravity, which we will see in the Fly Your Thesis program, we will have the opportunity to test the technology in microgravity conditions on the parabolic flight scheduled for October 2021.

We can continue testing and testing to achieve 100% reliability.

You can get more data at dzhdynamics.com

iOS 14.5 makes it possible to unlock the iPhone despite the mask!

WhatsApp has a new strategy to communicate its new policies

Elon Musk and Putin in the same clubhouse room

An Instagram test prevents you from sharing feed posts to Stories