Flying saucers have historically been associated with fictional stories related to an eventual visit from beyond the limits of our planet. Soon, we could see them on Earth, but leaving it, heading to Mars.

This technology, which makes it possible to “levitate” small fragments of mylar, a polymer capable of reflecting a lot of light, is under observation by NASA, for an eventual implementation of these systems in exploration missions.

Foundations of an ambitious project

The proposal is far from the classical conception of flying saucers, at least in appearance. The advances made at the moment are only to demonstrate that the technology works, but for the moment they have been executed on a smaller scale.

A team of scientists from the University of Pennsylvania managed to levitate two small plastic discs only with the light of LEDs from many directions, present in a 10-liter vacuum chamber.

The process invoked by this experiment was photophoresis, the use of light as a means of transport. In the vacuum chamber, where the small mylar discs were inserted, the energy from the LEDs heated their center, energizing the air particles under the plastic and propelling the plates with a small propellant burst. 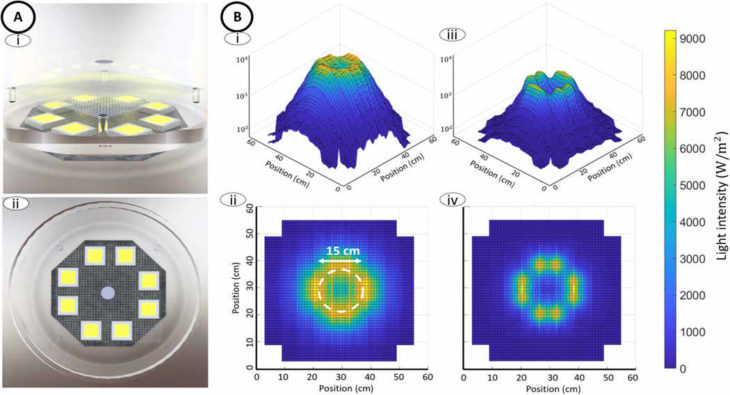 Figure A: Top view of the experimental setup / Figure B: Experimental measurements of the intensity of the light beam.

The lights, located at different points in the vacuum chamber used in the experiment, are the key to giving direction to the saucers. The research report indicates that if light hits the bottom of the discs, it transmits heat in a way that activates the movement of its molecules in a downward direction, resulting in propulsion of the disc.

This experimentally validated model projects that the exercise carried out in this experiment can be applied on a larger scale in near space at altitudes between 50 and 100 km. These mini flying saucers can use natural or artificial light sources, from any direction, to remain suspended in the air for a long time.

The project is subject to improvements. The idea is to make these saucers as robust as possible, to achieve loading sizes close to 10 Mg, a margin useful enough to load sensors for dust, temperature, pressure or CO2 levels.

From NASA, they expressed interest and support for this project. Paul Newman, chief scientist for earth science at the US Aerospace Agency’s Goddard Space Flight Center, said, “We don’t have that kind of information about Mars. It would be fantastic, ”he commented on the presentation of this trailer, emphasizing how easy it would be to go back and forth with new data records on the red planet.

Mario, Zelda, Splatoon… What to remember from the last Nintendo Direct

Ford: towards all-electric in Europe by 2030

So are the new Samsung Galaxy S21 phones