A new study shows that if 2020 has been marked by the reduction of our mobility, our mobile phones and their chargers have consequently become even more precious, and even for some more important than our partners. The confinements have made us less mobile, but more “mobile-addicted”!

The survey, conducted by OnePoll for OnePlus, spoke to 9,000 Europeans between the ages of 18 and 35 to determine how the lockdowns have affected their relationship with their phones. The results show that this relationship is increasingly close, with more than 95% of respondents sleeping in the same room as their phone (97% in France), nearly eight out of ten Europeans who have it within reach. hand at any time and 77% who pick it up within fifteen minutes of waking up. For their part, 66.8% of French people admitted to consulting their phone as soon as they open their eyes, a record in Europe.

Teleworking has also allowed us to take advantage of the proximity of our chargers, nearly half of French people (43%) admitting to charging their smartphone at least twice a day. During that time, almost 2% even said they plugged in their phone five or more times! 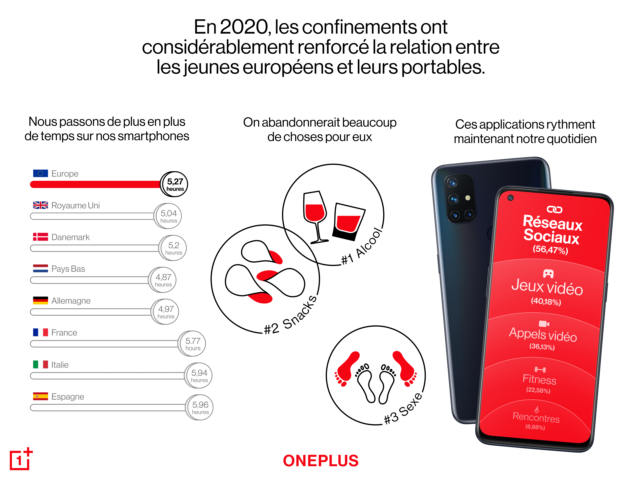 Take my partner, but not my phone

When asked what they would exchange their phone for, the answers given by those interviewed have something to raise eyebrows. Almost half of French people surveyed said they prefer to give up alcohol (45.2%) and crisps (44.1%), if that means keeping their precious phone with them. Even more shockingly, over 14% of Britons would rather give up sex than go without screen time. Similarly, nearly 5% of European respondents said they would rather give up their partner rather than their phone, about as much as those who confessed that they would trade their best friend for their device.

The investigation also showed that across the continent, smartphone use has skyrocketed since the start of the first lockdown. Young people in three countries in particular admitted to spending much more time glued to their screens in 2020 – the French (55%), Italians (56%) and Spaniards (51%), figures much higher than the European average of 39%.

Nomophobia on the rise

OnePlus also asked young Europeans if they know the term “Nomophobie”, a medical condition defined by the fear of being without a cell phone (the term comes from “No Mobile Phobia”). And the results are clear: a quarter (25.70%) of French people consider themselves to be suffering from nomophobia, a figure within the European average (26.5%). Unsurprisingly in view of their previous answers, the British are the most affected by nomophobia, up to 32%.

Whether they have nomophobia or not, respondents implement multiple strategies to avoid running out of battery, whether it is closing background apps (61%), reducing brightness (58%), turn off Bluetooth (47%) or even put your phone in airplane mode (40%).

Sony will soon give you these 9 great games for free

Among Us: a new map is coming soon!

How to find a mobile in silent mode

Machine Learning Models Not Ready for Clinical Use in COVID-19 Diagnostics, Study Finds