Amazon parcel deliverers in the US must sign a declaration of consent stating that they agree to extensive surveillance measures. Among other things, it is about facial recognition and behavioral analysis.

Those who do not agree to the surveillance do not have to sign, but lose their job. Anyone who signs agrees to be monitored almost constantly at work. Four cameras, an app and face recognition are then installed in the delivery vehicle concerned.

A screenshot of the declaration of consent has now been made public on Twitter. This shows, among other things, how Amazon imagines the monitoring of its employees. 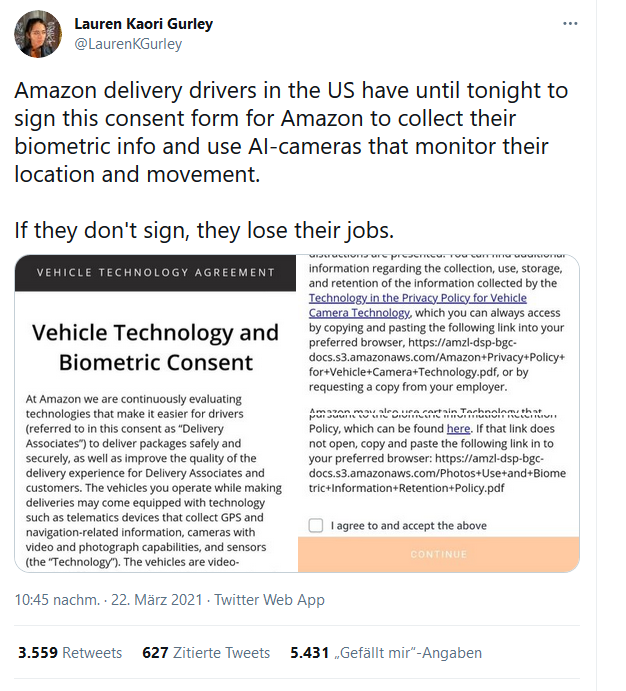 Many employees are extremely skeptical about the new features. One case has already become known in which an employee voluntarily resigned.

According to information from golem.de, a similar process is said to have already been used in Germany.

It is not the first time that Amazon has had to deal with allegations about its dealings with its employees. As an employer, the group is repeatedly criticized. It is particularly often a question of surveillance measures of various kinds.

SwitchBot Curtain in black and solar panel on Amazon

* For links marked with a *, we receive a commission if a booking or a certain promotion is made via the linked provider. There are no additional costs for you. We do not receive any money for simply setting the link.

The OnePlus 9R is a turbocharged 8T

Samsung would launch a smartphone that folds in three this year

Will the iMac M1 Touch ID keyboard work with your old Mac?