Like every week, we present two games that we have played recently. This time, there is no theme or common point between the two games, apart from the fun we had while playing them and their return to stock in your favorite store. Take the time to dive deep into the oceans and evolve your species to survive underwater threats, or play the addicting Patchwork Express more lightly.

Oceans – Will Your Species Survive? 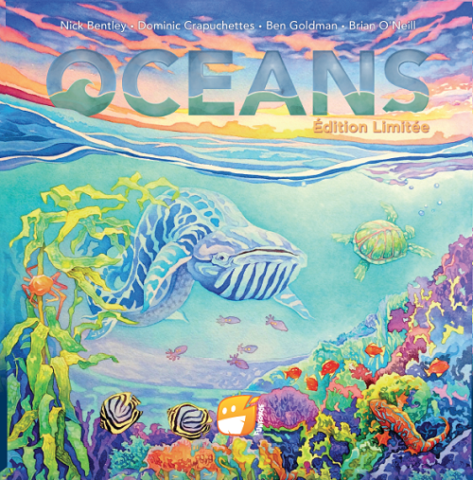 Immerse yourself in the vastness of the cosmos, a mysterious underwater world where your survival is constantly threatened. Tentacles, sharp teeth, black ink, baleen … In Oceans, you will have to skillfully evolve your species by giving them new characteristics to allow them to protect or attack, and to feed themselves enough to survive and dominate other species. 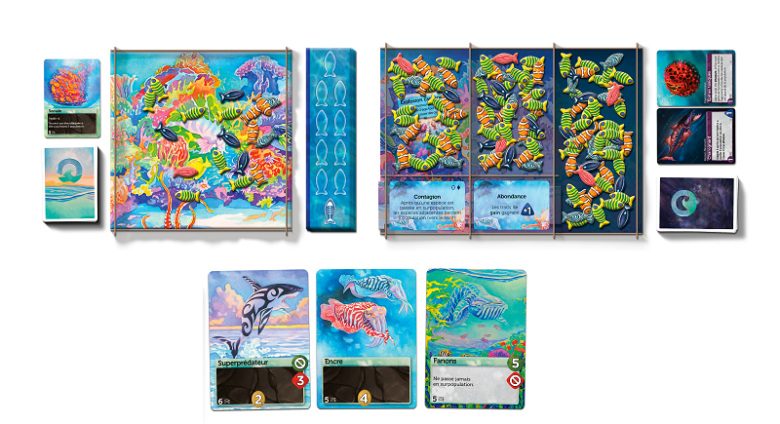 Each player begins the game with six trait cards drawn at random. These cards represent the characteristics that you can use during the game to create species and then make them evolve.

On your turn, you must play 1 card from your hand (two cards from a certain point in the game). If it is the first turn, this card is used to create a new species, but during the following turns when you play a card you can choose to create a new species or to evolve one of your species already in play within the limit of 3 cards maximum per species. This card gives it different characteristics such as attack power, digging and / or defense, and often a special action. These actions can for example protect your species, guarantee it food each turn or even create combos by reacting to actions made by other species. You have to skillfully choose the cards you assign to your species to ensure you feed them as much as possible while ensuring their survival. 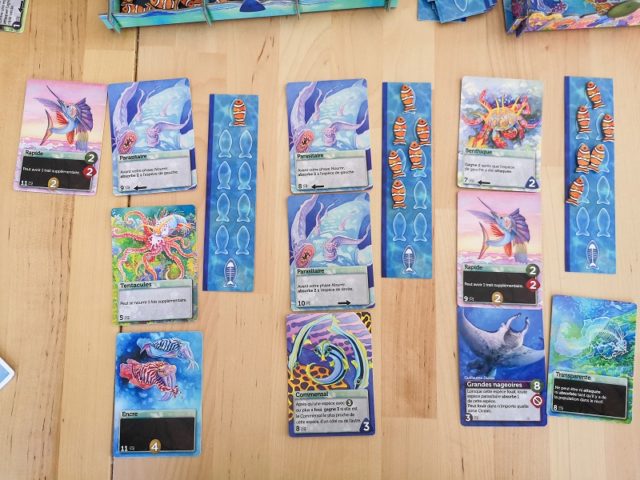 After playing a card from your hand, you must feed a species. ONE species. Usually the more species you have, the more points you can make each round. But only one species can feed per turn either by attacking another species if it has attack strength, or by burrowing in the reef. You collect fish from the attacked species or from the reef depending on the chosen feeding method.

Finally comes the stage of aging of all your species. You take a fish token from each of your species, which you place behind your screen to obtain one victory point per fish at the end of the game. But if a species has no fish during this phase, it does not survive and goes extinct… It is the harsh law of the Ocean. You quickly understand that you have to find interactions between your species or in reaction to enemy actions, a fish engine to be able to guarantee your species to self-feed and thus guarantee their survival and allow you to harvest a maximum of points.

The game ends when there are no more fish available in the ocean. The player with the most points wins.

If you’ve played its big brother Evolution before, you’ll be on familiar ground, even if Oceans stands out enough to be a game of its own. For others, Oceans requires a first part to be well taken in hand. For this, a variant without abyssal creatures allows you to approach the game with all the mechanics without having a game that is too complex or aggressive. In addition, since you can only play one card during the first few laps, Oceans allows a slow rise in engine power that you create. Your species slowly begin to be created and evolve, and during the feeding phases you will most of the time provide yourself in the reef rather than attack the adversary. But after a while the reef will run out of fish, and predators will appear to attack other species, but especially from a certain condition, the Cambrian explosion takes place, and things start to get serious. Not that the game was uninteresting until then, but the game is growing in intensity and complexity. You now play 2 cards per turn and you must also age 2 times each of your species, and therefore be more likely to see them die out. To limit the breakage, you must find combos to bring them fish. Some will, for example, absorb fish from an adjacent species, which may be yours or that of an opponent, or feed in reaction to an attack. A great strength of Oceans is that the game does not lack interaction and aggressiveness between players, but also between your own species.

To build combos all as powerful and diverse as each other, the game offers around 90 unique Abyss cards. These cards are more interesting than the one in the basic draw pile, but to play them you must pay a victory point cost. You must therefore be sure to make them profitable before playing them. With its 90 maps, Oceans offers good replayability, also provided by around twenty scenario maps. In each game, 2 scenario cards are placed and activated when there are no more fish in the corresponding ocean compartment. Some scenarios make the game more complex, others more aggressive or both at the same time, forcing you to adapt in each game. This brings us back to the heart of what Oceans is: knowing how to adapt in order to survive and win. 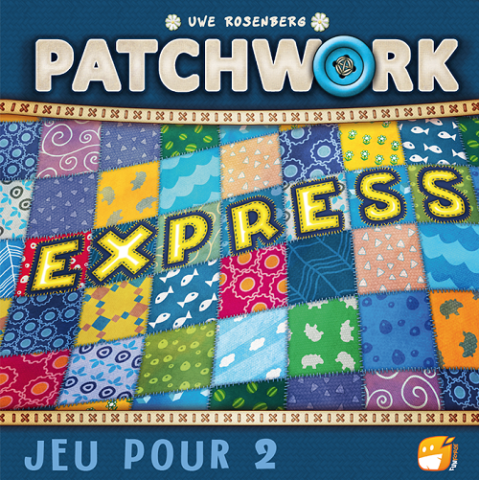 Do you have 10-15 minutes of spare time and you want to play? Find all the pleasure of Patchwork in a shorter time format! Ah, but you don’t know Patchwork? No problem, it will only take you 5 minutes more for us to explain the rules to you. I will take care of it now ! 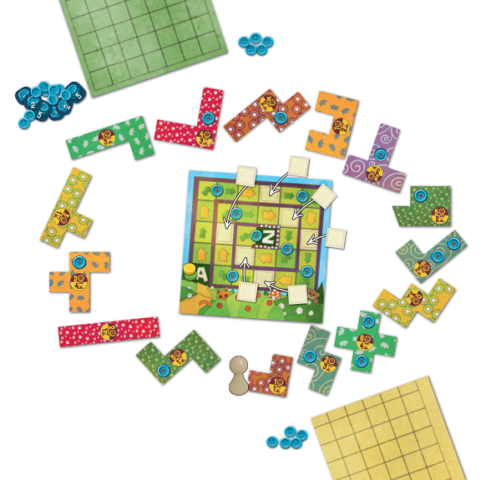 Patchwork Express takes again the basics of Patchwork by simplifying them and by shortening the playing time (which was not all the same already very long). Each player has a 7 × 7 square board which serves as a support for the creation of his Patchwork. A Chrono board, common to both players, is placed in the center of the table with pieces of fabric in the shape of polyominoes distributed in a circle all around.

In Patchwork Express, you don’t necessarily take turns. It is the player whose pawn is the furthest behind on the Chrono board who plays. On your turn, you have the choice between advancing your pawn on the chrono track to gain buttons or recovering a fabric tile to place it on your board. If you advance on the chrono track, you place your pawn on the square located just in front of your opponent’s pawn to gain as many buttons as the number of squares thus traveled. These buttons are the victory points but also the currency. If you decide to take a fabric tile, you must choose one of the three tiles placed in front of the neutral pawn around the board, move the neutral pawn after the chosen tile, then place the tile on your board as you wish. Most tiles have a button cost and a time cost. Time represents the number of squares your pawn must travel once the tile has been placed. When your pawn moves through a button on the chrono board, you collect as many buttons as the number of buttons you have on the tiles on your board. You also get a piece of leather if you are the first to stop or pass it. These pieces of leather are very interesting for filling holes on your patchwork.

The game ends when both players have reached the finish line. The winner is the one who has the most victory points by adding the number of buttons possessed minus 2 points per empty square on his board. 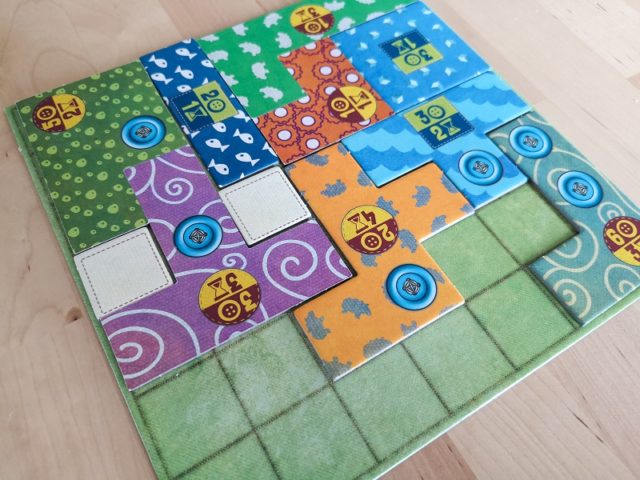 Not having played Patchwork first of the name, we’re not going to tell you which one is better and whether or not it is worth owning both versions. What’s for sure is that we loved Patchwork Express and have been playing it several times a week since we got it. But why so much love? Patchwork Express very simply takes up the principle of Tetris-style tile placement where we fit polyominoes into each other while adding strategy. The choice of tiles is made according to several variables: the complexity of its shape and the number of buttons it can bring us, but also its cost in buttons and time. It is important to think carefully about the piece you choose and to know how to delay to replay an additional turn before your opponent or optimize their movement in order to regain the buttons necessary to have access to more expensive tiles. We also try as much as possible to recover pieces of leather that are very useful to fill empty boxes that are badly placed. Simple, fast, efficient and accessible!

If you are familiar with Patchwork, here are the differences:

The other rules remain unchanged.

Samsung Galaxy demo in a week