In the history of mice for gamers, Roccat is a manufacturer with a particularly important place. The Kone is a legendary model that has been adopted by thousands of gamers. Its reissue, the Kone AIMO is now on sale at 54.99 euros. 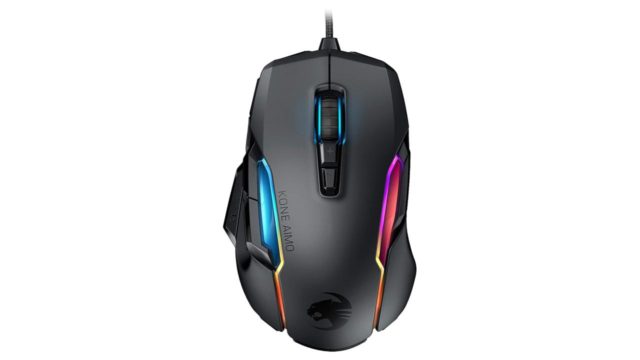 Usually sold at 80 euros, the Kone AIMO benefits from a nice reduction of 31% to fall to 54,99 euros on Amazon and Cdiscount. It is quite simply one of the best video game mice on the market, with unmistakable ergonomics and a high-end backlit design.

Find the Roccat Kone AIMO at 54.99 euros on Amazon

Find the Roccat Kone AIMO at 54.99 euros on Cdiscount

The Roccat Kone AIMO in detail

The Roccat Kone AIMO is a mouse intended for demanding gamers which is the result of several years of innovation and design. Its main advantage lies in its design and ergonomics, one of the most successful on the market. The grip is intuitive, and everything has been calculated to perfectly match the length of your index finger, your major, and the shape of your palm. It is particularly appreciated in precision games, but also in nervous games that require responsiveness and good grip.

This new version of the Kone is also an opportunity for the manufacturer to add an even more precise sensor. The Owl-Eye makes its appearance here with an accuracy of 16,000 dpi. The wired mouse will perfectly transcribe your movements and will be able to change its sensitivity according to the profiles that you assign to it thanks to the 2 buttons which are located under the main wheel. On the left side of the device, there is a panel of configurable commands to choose from among 23 different functions!

Finally, this new model sports a futuristic and bright design. The mouse has no less than 5 independently configurable lighting zones. AIMO illumination is able to display beautiful effects that synchronize with each other.

Find the Roccat Kone AIMO at 54.99 euros on Amazon

Find the Roccat Kone AIMO at 54.99 euros on Cdiscount

Xiaomi presents Mi Band 6 in the launch on Monday!

Gnome takes a qualitative leap in its big update, resembling more of macOS

MASsolidaria, the Internet access plan for vulnerable groups of the MASMOVIL Group

Redmi is making a gamer phone