To improve the user experience of Google Maps, the firm relies on artificial intelligence. It announces new features that promise to facilitate our mobility and in particular thanks to augmented reality.

It is far the time when the road map was the ally of globetrotters. Since then, solutions like Google Maps have imposed themselves and have upset our mobility. If the tool is indeed very practical, even to the point of sometimes becoming essential, the firm of Mountain View does not intend to rely on its achievements. In a press release, Google announces a host of new features intended to improve the user experience. Boosted by artificial intelligence, they intend to revolutionize our daily lives, by giving us access to a lot of information in real time.

Live View, to guide you inside a building 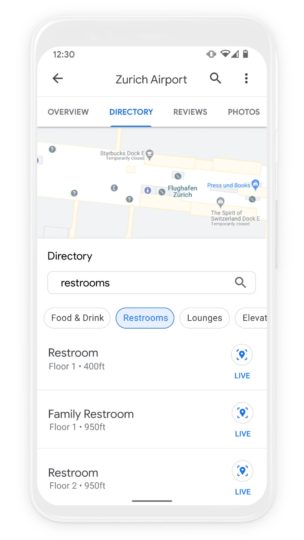 That’s it, you’ve arrived at your destination. After having scrupulously followed the directions of the GPS to get somewhere, you must now navigate inside a huge building. But after doing several times the turn, your staunch ally is no longer of great help. Aware that it can sometimes be very complicated to repair yourself in a place, Google unveils its new feature called Live View. It allows, thanks to augmented reality, to move towards a specific point. The indications are displayed directly on the screen and thus prevent users from getting lost. In an airport for example, the tool will display the steps to follow to get to the correct boarding gate. Thanks to an animation, captured in Zurich, we discover that Live View is able to say how manyfloors it is necessary to get off to get to its point of arrival. In particular, he will be able to locate the nearest elevator or escalator.

Plan your outings according to the weather and air quality

In its press release, Google also announces the imminent arrival of a layer Weather forecast. It will make it possible to know in real time the meteorological conditions in the sector, as well as the forecasts. The tool will tell you in particular whether it is necessary to bring an umbrella or if, on the contrary, you must put your coat in the closet. The second component on which Google Maps wants to improve, it is on the assessment of air quality. This new layer will let you know if the air you breathe is healthy or not. In the case of people sensitive to pollution or pollen, it will be possible to obtain more information before leaving home. If the layer weather will join all Android devices in the coming weeks, the air quality layer will first be deployed in certain regions such as Australia, the United States and India, before being available to everyone.

Getting around in a more ecological way

Last September, Google announced that it had made commitments to help its users reduce their environmental impact. In this sense, the firm has developed a new route mode that allows the carbon footprint of its trips by private car to be reduced as much as possible. Concretely, and this thanks to the information provided by the American laboratory National Renewable Energy, Google Maps will suggest a route that will optimize fuel consumption based on several factors. Thus, the degree of the slope of a road or the slowdowns due to traffic jams will be taken into account for the calculation of the route. It is also this optimized route that will be offered by default on all applications. Maps in the coming months in the United States. Again, international deployment will be offered later. Note that those who prefer the fastest route can do so in the application settings.

YouTube hides the "dislike" count in its new experiment

Roborock is teasing a new vacuum robot for CES 2021