Social networks appear as one of the favorite options for Internet users for the consumption of news. This has aroused a series of sharp observations by those who see in these systems a series of vices that influence the construction of social imaginaries through communication.

A significant fraction of these criticisms have been directed at Facebook, at a historical level at this point, for all the controversies in which this company has been involved in recent years. For its part, the company presented a series of modifications to its main platform, patenting its efforts to correct this situation and safeguard its reputation.

New facilities for ordering the home screen on Facebook

By default, the Facebook home screen presents a selection of content selected by the platform’s algorithm, based on the preferences profile of each user, which the social network builds based on information collected from the activity within Facebook, in other corners of the web and based on factors such as location.

For many years, Facebook has allowed toggling the mechanisms that govern the selection of posts on the home screen. In addition to the aforementioned option, it is also possible to choose the “most recent” mode, which presents the publications of the profiles, groups and pages followed in chronological order, without using algorithmic filters.

During the last time, the platform gave preference to its own content selection mechanism, relegating the option to view recent publications to a more remote segment of its interface.

Now, with this new approach to the platform, it will be possible to easily switch between three tabs: the classic start, a section with the latest posts from the followed accounts and a new third section: Favorites. 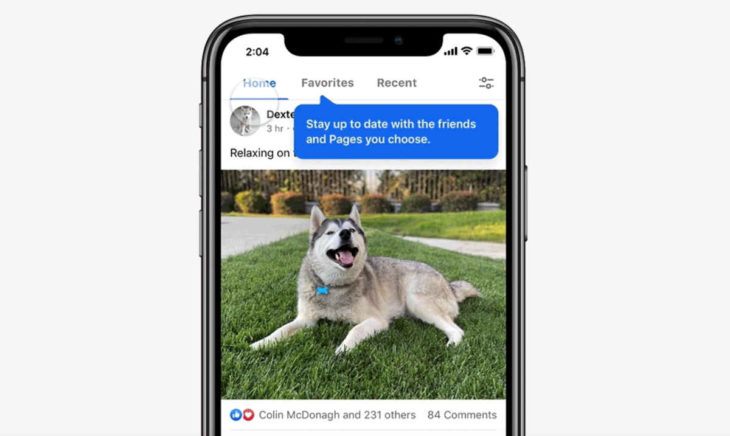 The possibility of seeing the publications of your favorite pages and profiles in the first places of the Facebook home screen already existed, thanks to the “see first” function, which had to be activated individually with each account selected for this purpose.

This purpose remains active within the platform, but now rethought under a new dynamic. Now, through a favorites section, it is possible to form a list of up to 30 friends and followed pages of your preference, to see their most recent publications in chronological order, through a dedicated section on the home screen.

Along with these options, presented in the blog de Nick Clegg, vice president of global affairs at Facebook, the implementation of new facilities to filter who can comment on a post and the addition of a link titled “Why am I seeing this?” together with certain recommended publications, to make the dynamics behind the recommendation algorithms transparent.

Although the functions presented are not entirely new, the approach with which they were released shows us that sometimes, it is enough to rethink certain aspects to revitalize a service.

Now it remains to be seen if this proposal manages to obtain the expected acceptance in its users, considering the failing reputation of Facebook in the field of news dissemination and in the coverage of complex and sensitive events.

Update for Amazon Music on iOS platform in auto mode