The Roborock S7 has only just come onto the market and we are already seeing further developments in Asia. We were a little surprised when the Roborock S7 was presented to us without an extended obstacle detection. But it was just as clear that there was something else to come in the next few months.

In a video on Youtube, which you can see below at the end of the post, Roborock shows the new T7S. This is the Roborock S7, which we have recently been able to buy, but with a new feature called Reactive 3D. 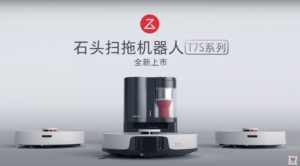 So far we only know the Reactive AI technology from the Roborock S6 MaxV, which is characterized by the camera in the front. Here, however, we are now seeing a new technology with an additional laser in the front, which so far has mainly been known from Ecovacs devices. Roborock has never done this before. It can therefore be assumed that we are not seeing the Roborock S7 MaxV (Reactive AI with camera) but another model. A Roborock S7 3D or Roborock S7 Max would be conceivable. The names are only speculations.

With all the models, it is becoming increasingly difficult to distinguish them by their names or to infer their features. If we try to deduce a little something from the past, the line-up for the year 2021 with the new information could look like this:

Incidentally, here is my detailed review of the Roborock S7:

Would you like to know more about vacuum and floor mopping robots? Then step on our “Vacuum & Floor Mopping Group”On Facebook. There you will find a huge community with whom you can exchange ideas on the topic! If you are looking for a new vacuum robot, our tool will help you Suction Robot Finder continue!

* For links marked with a *, we receive a commission if a booking or a certain promotion is made via the linked provider. There are no additional costs for you. We do not receive any money for simply setting the link.

Boursorama now allows you to track your cryptocurrencies

Galaxy A32 offers 5G at an affordable price