In May 2019, Spotify announced that it would develop a physical product for automobiles. The idea would be to develop a gadget controlled by voice command and powered by a digital assistant.

Almost two years later this gadget has not yet been released, but we already have a clearer idea of ​​what it will look like. All thanks to renders discovered in the source code of the Spotify application.

Car Thing will be the first gadget developed by Spotify 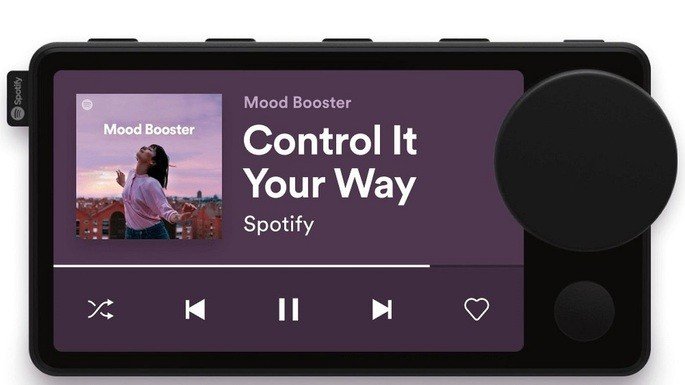 The image above was discovered by a member of the publication MacRumors and shows us a device very similar to the current systems of infotainment that we see in the latest cars.

However, this Spotify device stands out for the huge button that has on its right side. This may have something to do with the volume control or something similar, however, this is nothing more than speculation.

For the rest, we see a product with a large color screen and five additional buttons at the top. These will certainly be aimed at controlling actions, but we must not forget the component of voice commands also provided.

The image that has just been revealed coincides with the one we saw when Car Thing passed (that’s what Spotify dubbed it) through the FCC. Something that attests to the veracity of the product depicted here.

Apart from the design of this gadget, very little is known about the product. Although Spotify announced it almost two years ago, since then there has been an uncomfortable silence about it.

At the time, Spotify justified the product as follows: “Spotify is focused on becoming the number one audio platform in the world and we are continually testing a voice-controlled podcast and music device to help us learn more about how people listen to audio in the car”.

The absence of information has given rise to theories that the company has given up on the idea of ​​launching this product to the market. However, the appearance of this image in your application code rekindles the flame of hope.

Check out the new Loki trailer!

After Facebook and Discord, LinkedIn also wants to copy Clubhouse

all the new features of Season 2 of Cold War and Warzone!

OnePlus Band already has a confirmed presentation date! What to expect from the wearable