The flagship killer is back, and this year it bears the name of Poco F3. Splendid screen, ultra-fast processor, premium design, all for two or even three times less than a high-end smartphone. Concretely, what is this smartphone worth which seems to have everything going for it? 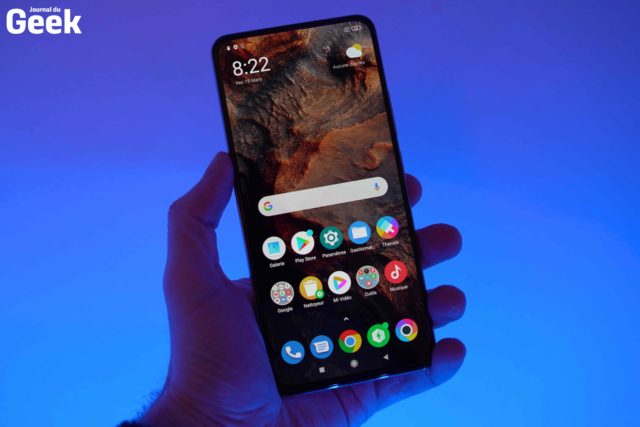 Formerly known as the Pocophone and offered by Xiaomi, Poco has since emancipated itself and is setting its course on its own. After a surprising Pocophone F1, a very satisfying Poco F2 Pro, the brand is launching the Poco F3 this time. No « Pro », « Max » or « Ultra », there is only one model, with a technical sheet to make high-end smartphones blush… but below the € 350 mark. So where’s the catch?

The POCO F3 is available at the attractive price of 299 euros for the 6 + 128GB version with the POCO50 code and 349 euros for the 8 + 256GB with the same promo code! The seller is an official seller with free and fast delivery from Europe.

If its technical sheet is already promising, we tell you right away: its look, too, is neat. In fact, we find ourselves no more and no less with a clone of a smartphone that already exists, but does not exist in France, the Redmi K40 from Xiaomi. Like what, the two brands would not be as detached from each other as they seem … Anyway, it’s a design that we really appreciated, in the spirit of Xiaomi Mi 11. 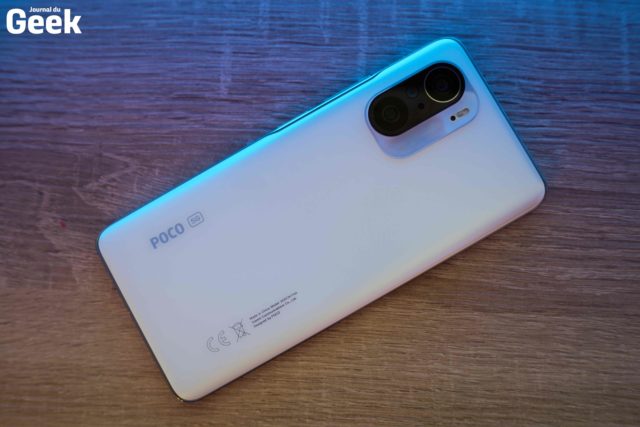 At the front, there is a large flat 6.64-inch AMOLED E4 Full HD panel, perforated on its upper part with a small punch of 2.76mm in diameter in which the front camera is housed. We find, in addition, a refresh rate of 120 Hz for a fluid display, coupled with a touch sampling of 360 Hz, which also offers a high level of responsiveness. Everything is covered with Gorilla Glass 5. Concretely, this slab keeps all its promises. It offers accurate and shimmering colors, a high level of brightness (1300 nits, all the same) and endless contrasts. The viewing angles are excellent, and, overall, we really have nothing to complain about. It is also HDR10 + certified, associated with True Display and True Color features for an ideal experience, since the smartphone will adapt the colors of its screen according to the lighting of the room in which you are located, a bit like at Apple with its True Tone. In use, it is really restful on the eyes. 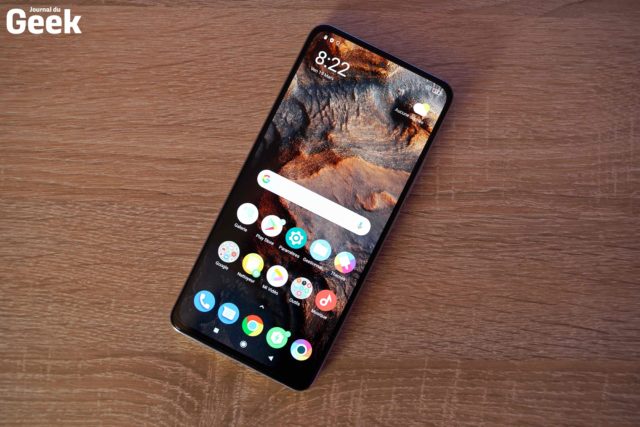 This panel is encircled by a plastic rim, the appearance of which is very similar to steel, and on which we will find the volume +/- buttons as well as the unlock button, also acting as a fingerprint sensor. . At the back, we find a matte finish of the most beautiful effect. The photo block, located at the top left, is rather original with a first black vertical strip containing the four photo sensors – two of which are rather imposing – which itself rests on a transparent plate containing the flash. The whole is coherent, and is not without reminding us of the atypical photo unit of the Xiaomi Mi 11, which we also found rather successful. 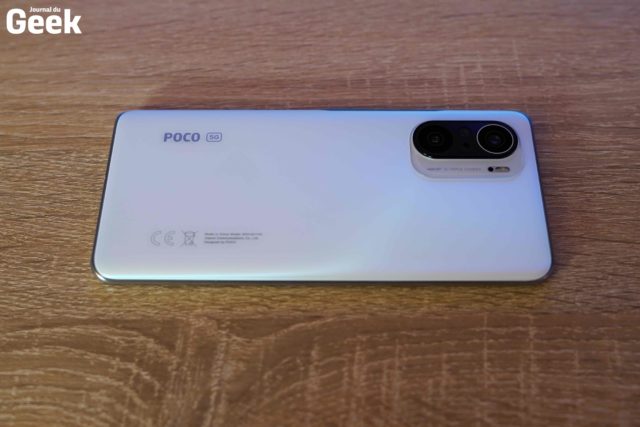 Otherwise, in terms of thickness, the Poco F3 is rather thin with 7.8mm thick, and its weight is rather contained in view of its size, with 196 grams on the scale. On the audio side, Poco had the good idea to pierce the upper edge of the smartphone to integrate speaker grilles, in addition to that contained on the lower edge, next to the USB-C port for charging. As a result, the stereo is rather well transcribed without one side sounding louder than the other, as is the case on many smartphones that take advantage of the speaker grille initially intended for calls to offer stereo. The sound reproduction is quite good, even if it is still sorely lacking in bass. For this, we will soon have to go through a headset or headphones, but preferably wireless, since the Poco F3 does not have a 3.5mm jack. 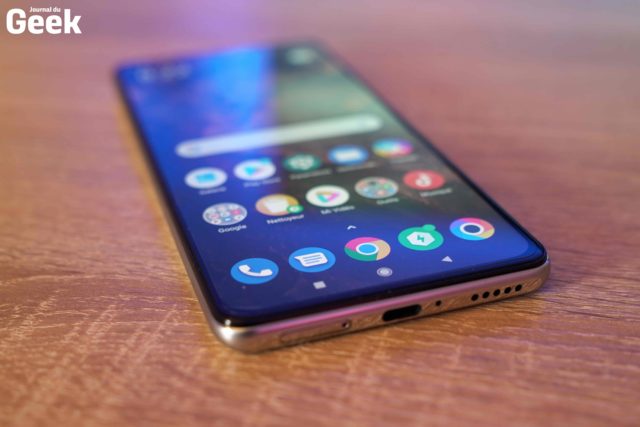 If the design and display really feels like a premium smartphone in your hands, is the Poco F3 as good on the inside as it is on the outside? The answer is unequivocal: yes, it is. The Poco F3 indeed offers a Qualcomm Snapdragon 870 SoC. It is not the most powerful, the impressive Snapdragon 888, but we still remain in the continuity of what Qualcomm did best last year, the Snapdragon 865, the chip that equipped most of the top smartphones. range in 2020. In fact, the Poco F3 will therefore offer a higher level of performance than all these flagships of last year, and this for a third of their price. Not bad is not it ?

The advantage of the Snapdragon 870 is that it is not only slightly more powerful than the Snapdragon 865 (3% to 10% faster, according to Qualcomm), but also that it offers the Snapdragon X55 5G modem, which will allow you to use the Poco F3 with the new generation of mobile network. A real guarantee of longevity if you want to keep your mobile for many years. 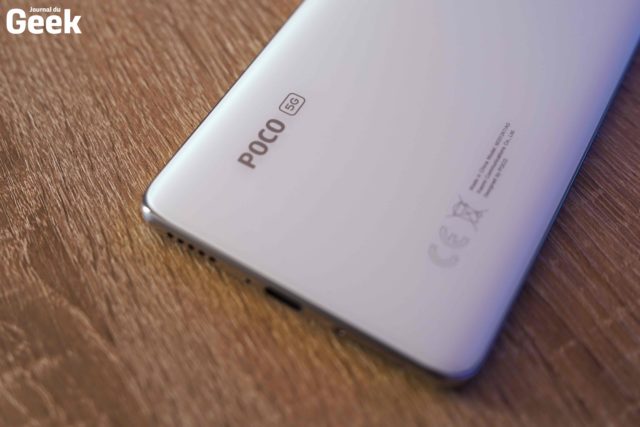 On the autonomy side, the Poco F3 has a 4,520 mAh battery, which is more in the standard of current smartphones. We have, in addition to the fast 33W recharge, which allows it to be completely refilled in less than an hour. It is clear that, if the Poco F3 is not particularly a champion in this area, it is doing very well by systematically exceeding the full day of autonomy. We can even last two days with moderate uses.

To finish on the software part, the Poco F3 is equipped with Android 11 and Xiaomi’s house overlay, MIUI 12, which lets us think that the two brands are ultimately not so far from each other. For more details on the new features of the last major iteration of this software interface, we invite you to consult our complete handling of MIUI 12, but, in short, we found it to be excellent. Even if we find here and there the big airs of iOS, MIUI 12 allows to streamline navigation by providing many very successful animations, which all the more pleasant on a 120 Hz panel as proposed by the Poco F3. There are also new settings for privacy protection, floating windows, a new app drawer and a redesigned dark mode. A few shadows on the board, however: MIUI 12 arrives with a number of pre-installed applications, such as mobile games in particular, and, if we can of course uninstall them, it can be a bit annoying. 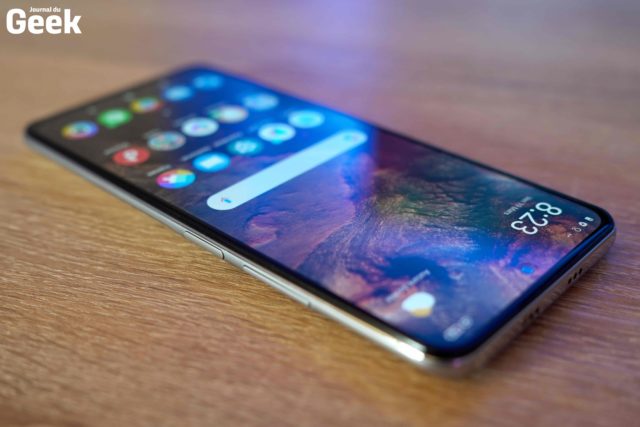 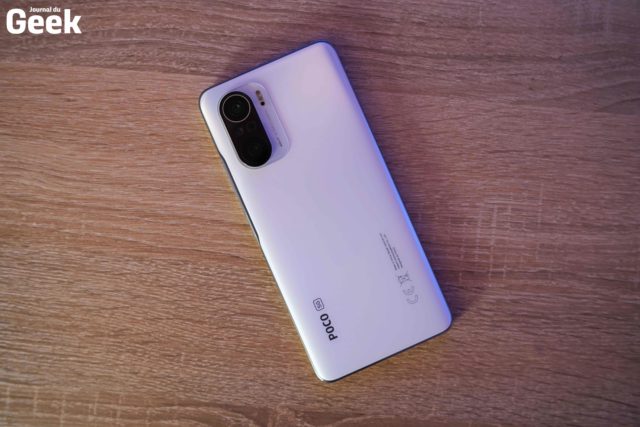 The photos and videos from the main sensor of the Poco F3 are correct, but we remain far from the level of a current high-end smartphone. If the colors are correct, even if slightly desaturated, the sharpness leaves you wanting and the smartphone has the annoying tendency to underexpose the dark areas of the image and to add too much contrast to them, which causes a large number to be lost. details. Strangely, if the smartphone is not exceptional during the day, it does better at night, with a frankly satisfactory Night Mode. On the video side, this sensor can shoot up to 4K at 30 fps, but unfortunately it is not optically stabilized.

The ultra-wide angle turns out to be quite correct, even if it noises quickly indoors. Under the sun, nothing to complain about, and it has the advantage of offering a rather homogeneous rendering compared to that of the main sensor. Note that in video, ultra wide-angle is limited to 1080p at 30 fps. Finally, there is a 5 MP telemacro, which, if it proves to be quite effective in practice, will only correspond to a very specific type of use. Unfortunately, no telephoto lens: it will be necessary to rely on the optical zoom taking advantage of the main sensor, and after the X2 zoom, we are already starting to see its limits.

Overall, the Poco F3 offers balanced and fairly decent photo / video performance. If we can seem harsh with it, it’s also because it gives a glimpse of the promise of access to a high-end smartphone for a fraction of the price. And it is clear that, on the photo side, this Poco F3 remains far from its competitors sold much more expensive. However, for this price, it’s still very good and the Poco F3 clearly ranks in the high average of smartphones sold at this price. More than words, examples:

Where to buy the Poco F3?

The POCO F3 is available at the attractive price of 299 euros for the 6 + 128GB version with the POCO50 code and 349 euros for the 8 + 256GB with the same promo code! The seller is an official seller with free and fast delivery from Europe.

Will the plastic housing of the Realme 8 Pro break in half?

Kit Harington in the casting of Modern Love season 2