After nearly two years of rumors, Apple has finally presented its solution to prevent users from losing their everyday objects. Here are the Apple AirTags.

After endless rumors, it was finally during its spring event that the Cupertino company formalized its AirTag, small connected objects fully integrated into iOS that will allow the user to precisely locate an AirTag and therefore the objects on which the AirTag is attached.

The principle is not new in itself and if we refer to the market of these small trackers, Tile has been present for many years. Moreover, with the rumors around the AirTag, Tile had not hesitated to go to the front to denounce a somewhat dominant position of Apple. But that’s another story. Today, we are talking about AirTags that can be purchased individually at a price of 35 euros or by pack of 4 at the price of 119.90 euros. 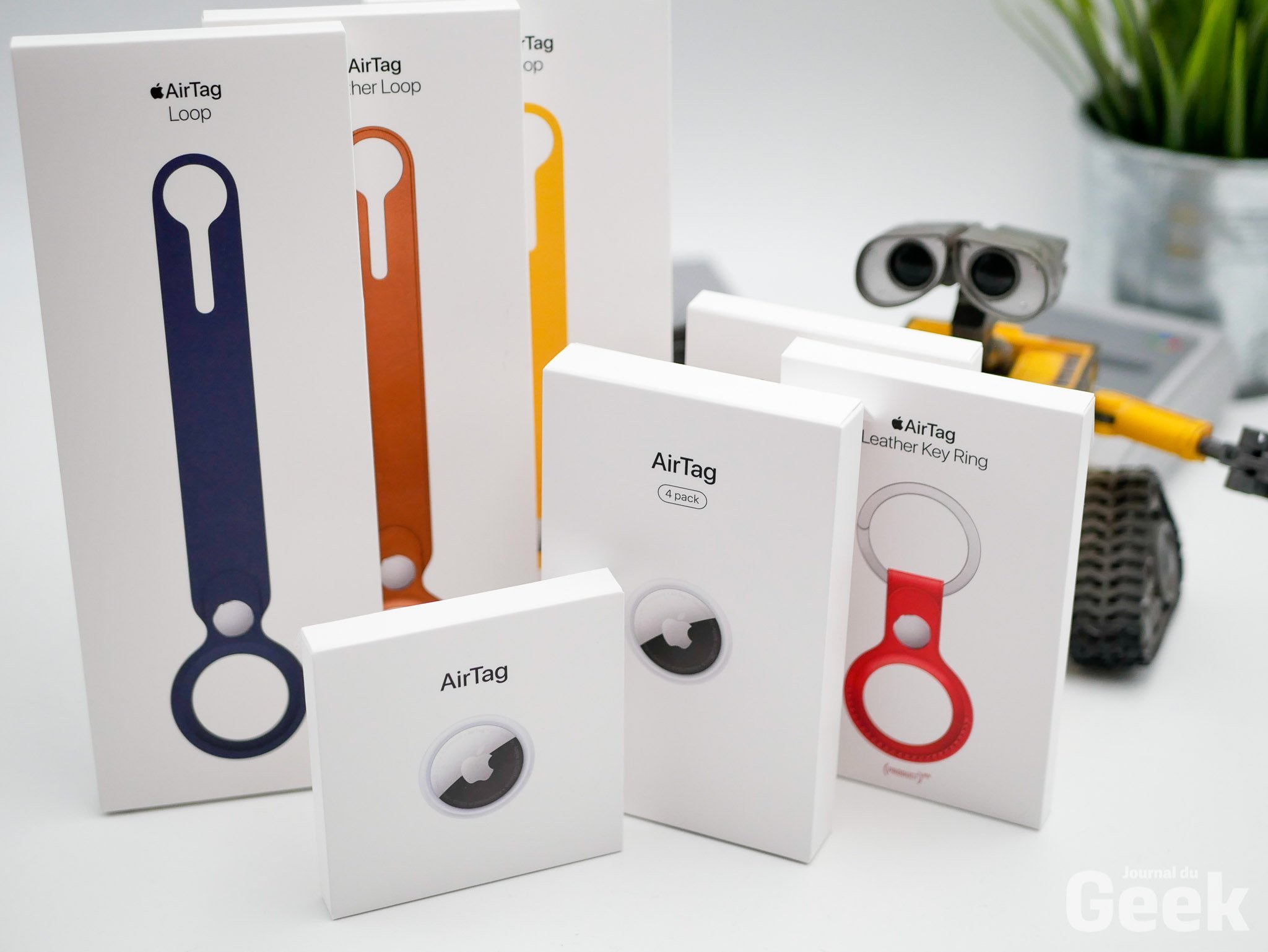 So already, for those who have not followed everything, what is an AirTag? It is a small tracker which communicates in Bluetooth with an iPhone or an iPad and which can be located thanks to the last recorded position but also in a more precise way, and this, thanks to the UWB technology which allows the iPhone to locate the AirTag very exactly when they are within range of each other. One of the most common uses will be to place an AirTag on your keys and you will know exactly where the keys are. The AirTag also has a small speaker and can ring at the request of the user to better be found.

The AirTag comes in the form of a small round white pebble that can be personalized with an engraving upon purchase. It works from a small flat CR032 battery and offers a battery life of about a year according to Apple. If the design is very successful with this cute little side, we regret that you need an additional accessory to put it with keys for example. Tile for example offers a square format tracker which has the advantage of having a small hole and therefore that we can use it as is and without additional accessories. 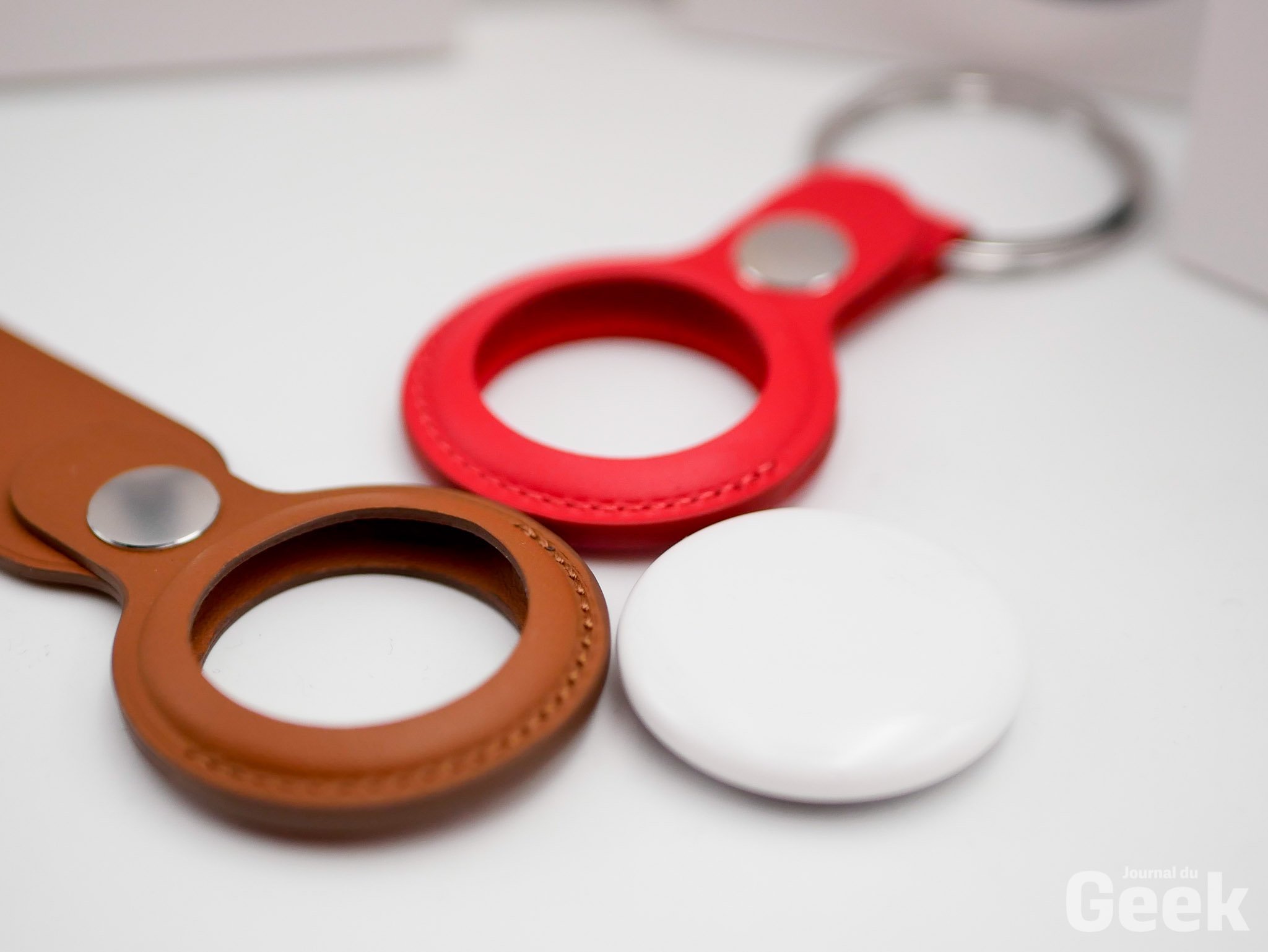 Indeed, in addition to the purchase of an AirTag, it will be necessary to think of an additional accessory. Apple offers straps or key chains of course but this increases the bill compared to the competition. It is Apple or it is not, moreover, Hermès continues its partnership with Apple and in the case of AirTag, it is the latter which is offered with the accessories of the French luxury brand. And because it’s Apple, there are already a bunch of props who have rushed into Apple’s new product, so it’s very likely to find more accessible accessories than those from Apple or Hermès. 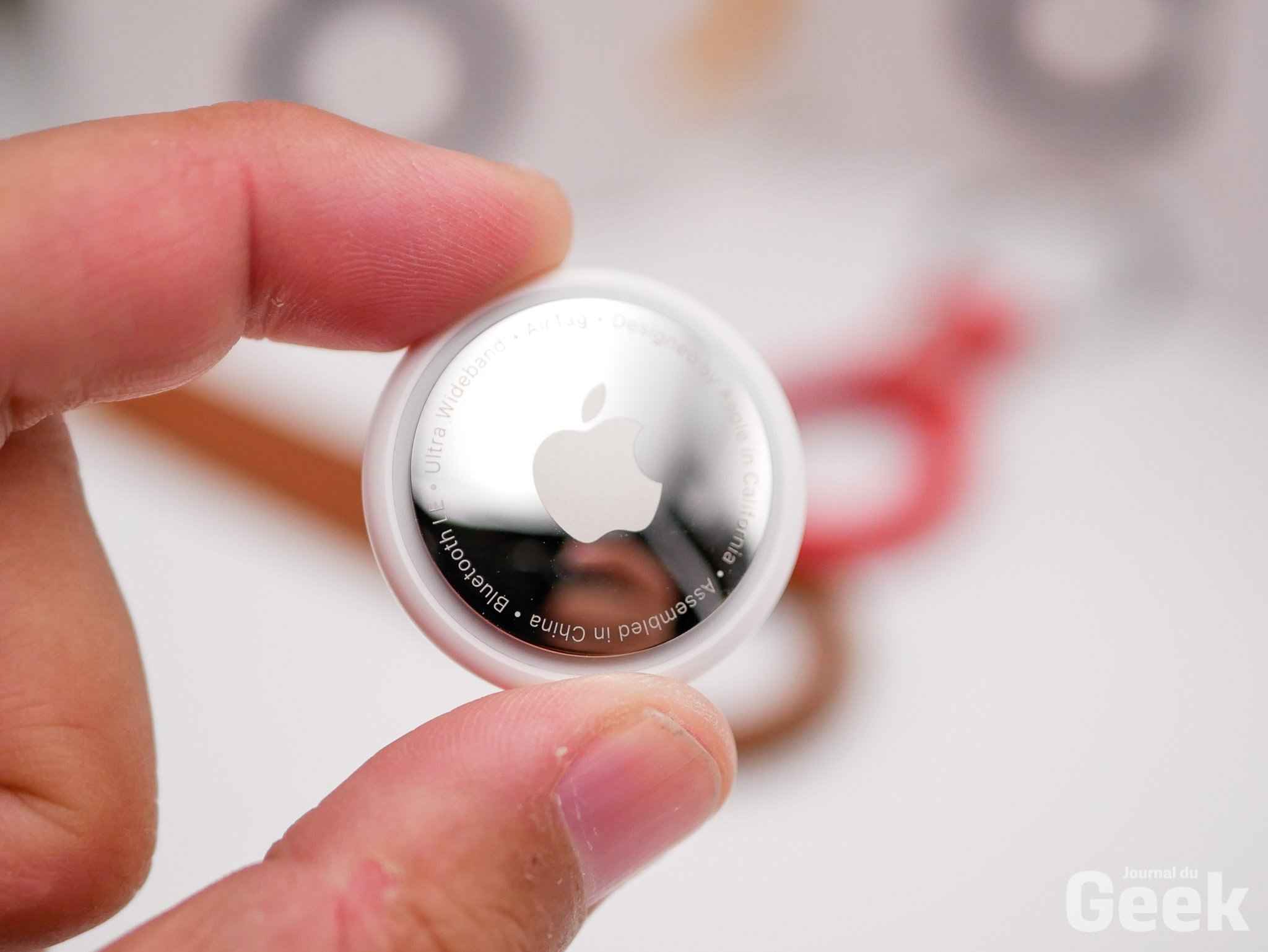 Coming back to the design, needless to say that an AirTag compared to a Tile or a Samsung SmartTag is a gap in terms of finish. Apple’s product is nicely finished and should appeal to anyone who is a real fan of the brand. With one of the accessories available, it is clearly a hallmark for iPhone or iPad users. Finally, it should be noted that they are IP67 certified and therefore water resistant up to 30 minutes of immersion. The AirTag on my keys, after a few days of use, does not show any scratches or the like. We will see over time and also according to uses.

The configuration and proximity

The configuration is very simple. You approach the AirTag to your iPhone, it is recognized, you choose a use, it is linked to your iCloud account and voila, it appears in your Find application. You can give it a name, make it play a sound to detect it and when you are less than 10 meters away, with UWB technology for Ultra Wide Band, the iPhone (iPhone 11 and 12) will be able to locate it with precision to around ten centimeters. Impressive.

On the other hand, if we can make it sound well, we would have liked the sound to be louder. On the other hand, on the Tiles, we found them too strong on a daily basis so it may be a question of habit above all. In any case, the Bluetooth connection, like UWB technology, works wonderfully and we are already starting to see other possible uses.

And when is it lost?

Like the competition, Apple will take advantage of the network of all iPhones on the market to create a kind of giant network. This is not limited to iPhone since it also works with iPads and Macs, everywhere in the world. How it works ? To put it simply, the AirTag emits a secure Bluetooth signal that can be detected by devices in the Finder network that are nearby. These devices send location information from AirTag to iCloud. Thus, the user can then go to the Locate application and view their AirTag on a map. Anonymity is preserved throughout the process and the data is encrypted so as not to invade privacy. Apple also promises a very efficient system in terms of energy and data.

Thus, with Lost Mode, it becomes easier to find your AirTag. If detected by a device on the network, the user automatically receives a notification. But that’s not all, we can also configure the AirTag so that its coordinates are sent to the person who finds the lost AirTag via NFC. In all cases, only the owner of the AirTag can locate it. Location data and history are not stored on AirTag. Devices that relay location information from AirTag also remain anonymous, and that data is encrypted every step of the way. This means that no one, not even Apple, can know the position of your AirTag, or know which device has located it.

Is it a tracking device?

With all these tracking features, some evil spirits might try to follow you by slipping an AirTag in your bag, for example. According to Apple, no one can follow you without your knowledge. If someone else’s AirTag ends up in your belongings, your iPhone (iOS 14.5 minimum) detects it and lets you know. Afterwards, it is not instantaneous. We don’t have the exact time, but the alerts occur within a period of one to three days. Thus, this AirTag will begin to send you an alert that it does not belong to you and can also ring to warn of its presence. Please note, these alerts are only triggered if an AirTag is separated from its owner, so no worries in a train with other people equipped with AirTags.

Now, without necessarily having the necessary hindsight, we took a test AirTag in our bag. This Airtag did not belong to us and it was at the end of the day that we had the alert that it was not our AirTag. As long as the AirTag is not declared lost, it is impossible to read the information on it. And in addition, the owner of the AirTag will be able to see the position of the AirTag so there you go …

There remains the question of Android smartphones. We know that AirTags are not compatible with Android smartphones for configuration and daily use, but can they be used to detect an AirTag that is hidden without its knowledge? We don’t have the answer yet. And finally, to finish, we remind you that the AirTag do not have a GPS, they are not real tracking tools like the accessories offered by Invoxia for example. AirTags are mainly used to spot things that have been misplaced. For flights and others, other products will be much more suitable.

Apple AirTag at the best price Base price: 35 €

More than 100,000 free resources to illustrate your projects