You can have the Apple AirTags buy in different variants. Anyone who currently wants to purchase a Hermès AirTag product from Apple will be bitterly disappointed because none of the three models is available. Voices are spreading that this could be due to a quality problem that leads to a defect in the devices.

No matter which version or which color you would like, the Apple Hermès AirTags are all “currently not available” according to the Apple website. An availability date is only given for the bag tag. The first suspicions of the reason are now emerging on the Internet: an anonymous writer reports that his Hermès key ring fell apart in his pocket. In the Apple Store, he was then informed that an exchange was not possible because the products were not available. He had the choice of a refund or of contacting Hermès directly.

I took my keys out of my pocket and was surprised to find only the Hermes Airtag and its strap in my hand. Not exactly trustworthy. It had had a good life with no significant stress or harm. At first I thought it had just been released, but on closer inspection it was clear that the bottom of its metal post had unscrewed at some point and eventually separated.

I called AppleCare and after confirmation of the problem was asked to take it to a nearby flagship store for repair or replacement. The representative had confirmed a replacement was in stock before making an appointment for me. But today, a day later, the Apple Store app showed that the Hermes keychains were not available, and when I got to the store I was told they had none in stock and couldn’t order either. My only option was to return it or take it to Hermes to see if they could fix it. 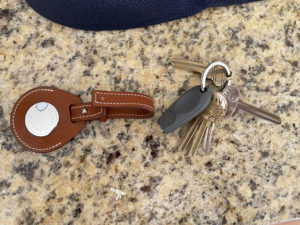 So far, the report is the only one covering this issue. Apple has confirmed or denied whether it is actually due to the poor quality why the products are currently not available. If you also have Apple Hermès AirTags with quality problems, you should contact Apple immediately or Hermès directly in order to get a refund or a replacement as soon as possible.

How about you, do you already have Apple AirTags and maybe even accessories?

Top tip: Surfshark VPN is the best and cheapest around

5G should arrive in Paris “in the coming weeks”

Hideo Kojima about to abandon Sony?