During the last few days, the evaluation of the Facebook app has fallen dramatically, both in the Play Store and in the App Store.

According to publicly available information, this is due to the coordinated action of activists, in protest against the alleged censorship of the social network on issues alluding to Palestine.

This situation, which has been observed since the weekend, has its origin in a call by pro-Palestinian militants on social networks, to reduce the average evaluation of the Facebook mobile application concentrates in the two aforementioned application stores . The invitation was to evaluate the app with the minimum grade.

Facebook and Instagram censor and limit posts about Palestine. So, several users have given single star reviews in App Store and Play Store.

As a result of this movement, the average App Store review has fallen to 1.9⭐
#GazaUnderAttak pic.twitter.com/ZryVEA4k9I

This digital activism intervention was raised in protest against the alleged censorship of Palestinian Facebook accounts. Some instructions to leave on their platforms were also shared and they instructed people to leave the Facebook application.

Although this information has been observed from some media throughout this weekend, NBC News managed to establish contact with Facebook to touch on points on this issue, which they have declined to comment on other platforms. According to its spokesperson, the company considers this situation internally as a high priority issue.

The Facebook spokesperson added that the company has a dedicated team that includes Arabic and Hebrew speakers who are “closely monitoring the situation on the ground, who are focused on making sure we are removing harmful content, while addressing any application errors as necessary. as fast as possible ».

The NBC News report also mentions that a software engineer wrote in a post on Facebook’s internal message board: “Users are not satisfied with our handling of this situation,” later updating that users “have started to protest against leaving a one-star rating. ‘ 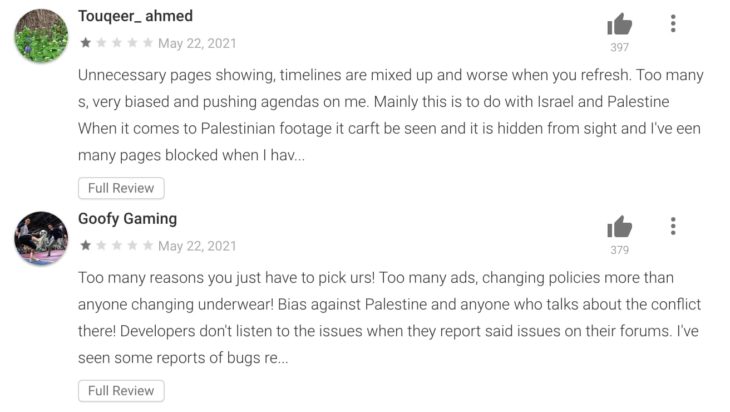 Some of the negative comments and ratings that continue to circulate in stores. Capture: Play Store.

Facebook has tried to get rid of these comments. After requesting it from the respective application stores, Apple’s response was known, which rejected the request. On the part of Google, the answer is not known.

Although it reached lower evaluations, at the time of publishing this note the apps achieved a slight recovery, still averaging notes below 2.5 out of a maximum of 5.

Coinbase will accept Dogecoin, the cryptocurrency based on memes, and that makes it go up in value

Xiaomi presented a wireless charging system that works from meters away

Insta360 GO 2, the smallest action camera in the world