The bicycle is living a new golden age which forces new fans of two wheels to question their safety. The helmet is of course essential, but we can go even further: the French company Urban Circus has therefore imagined an airbag jacket,

The boom in cycling since the outbreak of the health crisis has unfortunately been accompanied by an explosion in the number of accidents: in Paris alone, there were 36% more bicycle accidents last year. To protect yourself, the helmet is there and it is necessary, but it is not sufficient to ensure optimal protection of the cyclist. This is why Urban Circus has developed a jacket that contains… an airbag!

An airbag for the bike

The Cirrus is a jacket visible more than 150 meters away, and which incorporates an intelligent airbag that inflates in 0.08 seconds. The latter absorbs 90% of shocks, protecting the cyclist’s vital functions. Once inflated, the airbag protects four areas of the body: the neck, back, abdomen and thorax.

The Cirrus analyzes the movements of the cyclist in real time. The system records the user’s position more than one hundred times per second. And if the jacket detects a fall or an accident, it will inflate extremely quickly. The shape of the airbag makes it possible to stiffen the trunk to stabilize the vital organs, to avoid hyperflexions, to maintain the cervicals and the head (to avoid whiplash) and to completely protect the spine. 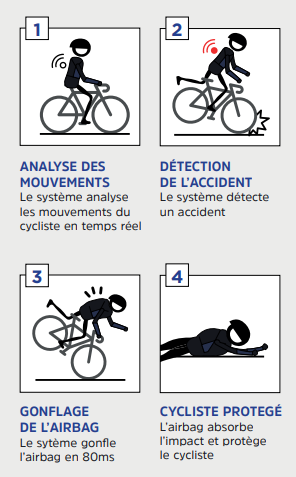 The Parisian start-up Urban Circus launched the marketing of its jacket on Kickstarter. The campaign is well underway with close to 50,000 euros raised. The Cirrus model with airbag costs € 511, or 30% less than the retail price (€ 730). Deliveries will begin in September.

How to have the European COVID passport from an Android mobile

This is the AC30 portable power station, from Bluetti

Iceland could rest on a submerged continent

Intego sale: the number 1 antivirus on Mac is at a broken price (unbeatable)

The new iMac M1 are available, here is where to buy them for the best price