After revising the Play Store, Google announced the possibility of installing WearOS apps from the smartphone on the watch. In addition, the company announced that it would make YouTube music available in offline mode and this app has now appeared in the Play Store for WearOS.

YouTube music for WearOS is in the starting blocks

Recently, Google made the new design of the WearOS Play Store official. The Play Store and the update of the app ensure that a first look at YouTube Music is possible.

Anyone looking for “YouTube Music” in the store and WearOS. If the filter is set, the app of the streaming service is displayed. However, further information is not available and installation is also not possible. If you search for the app directly on the smartwatch, you won’t find it at all.

The fact that YouTube Music is now appearing in the Play Store for WearOS could be an indication that Google is currently testing the app internally for the new operating system. 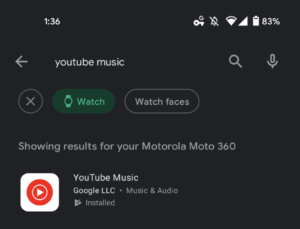 In the source codes of the YouTube Music app (version 4.37.53) a character string has also appeared that works to download songs to WearOS while the smartwatch is charging.

So there is little to see from the YouTube Music app. Google had officially announced the availability of the streaming service for a later point in time in 2021.

If you want to exchange ideas on the topic, then take a look in our group “Sports & fitness at home – smart devices make it possible!”On Facebook. There you will find a huge community that deals with smart topics across the board!

Pictured is the Poco X3 GT

Samsung Galaxy Buds 2: all the colors and details of the new TWS Bluetooth headset

“No competition” with Jeff Bezos, according to Richard Branson

Amazfit GTR2: you can now buy this good smartwatch!