The International Olympic Committee continues to be involved in Related controversies about whether or not the Tokyo 2020 Olympic Games should be held. Officially, the competition will be from July 23 to August 8, and since previous months we have seen the discontent of a large part of the population around the world.

However, there is now more disparity in what different people in different countries think. To compare this, a company specializing in surveys has revealed the figures of what thousands of people think and how this will affect companies at the marketing and sales level.

What do the Spanish and other countries think about the Olympic Games? 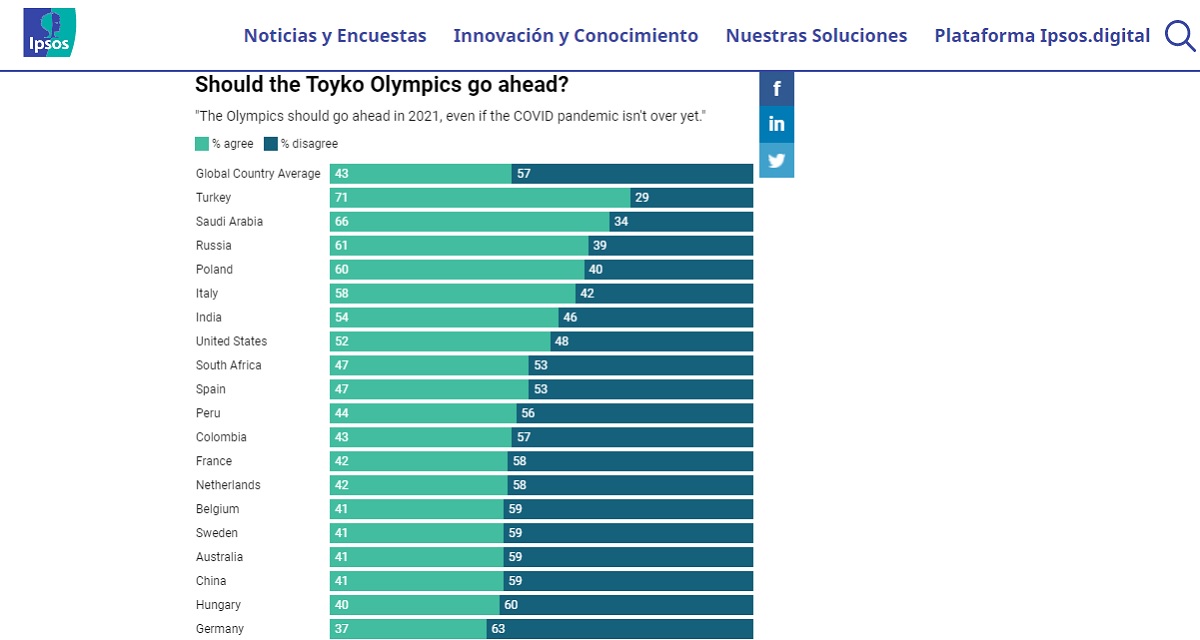 To get into the subject at once, in the study carried out by the company from May 21 to June 4 Ipsos, the opinion of more than 19,000 people from 28 countries is revealed, including Spain. In it, it states that, at least 53% of the Iberian population does not agree with the holding of the games. Worldwide, the figure increases to 57%, this as a result of the health problem caused by the pandemic.

But things get more difficult for the organizers of the event, because according to the survey, in South Korea 86% of respondents disagree, while in host Japan, 78% disapprove of the games.

Among the reasons that respondents support for holding the competition, 62% bet that it would be a more than important opportunity for the world to unite after the pandemic, but this may not be enough weight to balance the balance.

And what the statistics reveal in the area of ​​marketing

With regard to marketing and the entire advertising issue, it is well known that companies take advantage of events like this to increase sales significantly. However, in the first place, due to the lack of public on the stage and in the city, world-class companies will have a setback in the income from sponsorship concepts.

While some 60 Japanese companies are reported to have invested $ 3 billion in advertising, their reputation for supporting the event may decline substantially, leading to sponsorship of the games behind them. Toyota, for example, was one of the multinationals with the largest cut for supporting the competition.. But, due to the negative results of the local polls, they have decided to be against holding the Olympics.

With regard to the above, Akio Toyoda, Toyota Motor CEO, will not attend the opening ceremony along with the other executives. The reason? Well, very simple, they do not want to fall into the rain of criticism they receive and will continue to receive the programmers of the event. And we bet that surely other companies will withdraw their participation as sponsors of the event in the next few hours … we will see what position sports companies such as Nike and Adidas take.

Just less than 72 hours before the opening ceremony, it was known through CNN that almost 1,400 new cases of COVID-19 had been confirmed in Tokyo, the highest number since January of this year.

Louis Vuitton launches a portable speaker with an alien look

Mini Dungeon & Dragon without dragon: the new puzzle from DOuG!

Philips Hue Gradient function cannot yet use a HomeKit