In the technological world we always have certain mental gaps regarding the launch date of mobile devices and applications. It may be that, in some cases, a social network is older than we think, or, that a gadget has less time on the market than expected.

Therefore, as a list, today we bring a reminder with a graphic included to see what has been the most outstanding in terms of the presentation of technological alternatives. The top is completed by 16 products and services that have seen their premiere since 2010. 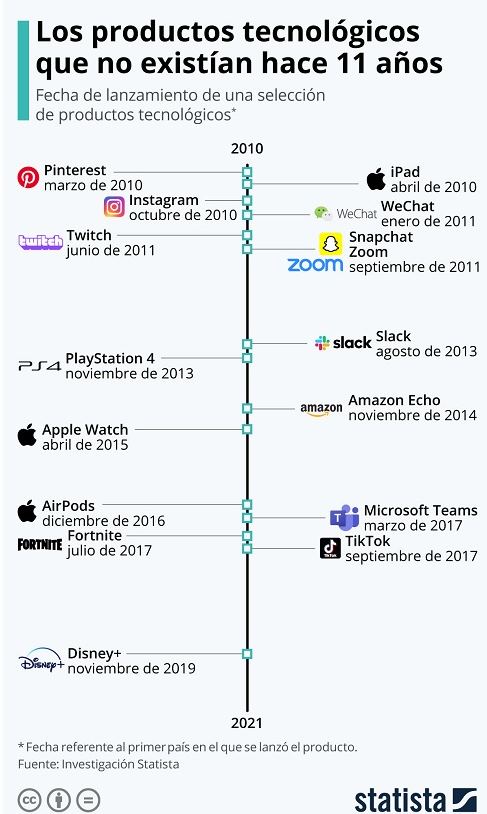 The German online statistics portal, Statista, has shared a graph showing those 16 technology projects that came to fruition and which are listed as some of the most prominent in the areas in which they are located.

Taking into account this chronological order, the first outstanding app is Pinterest, launched in March 2010. Apple followed suit when announcing the iPad, that ideal complement for those who are not looking for a desktop computer, but not a laptop either. Instagram, meanwhile, closes the top 3 of 2010 having been launched in October of the same year.

Contrary to what you would think, applications such as Snapchat, Zoom and even Twitch have been on the market for just over 10 yearsOnly since the pandemic began, the last two took off to gain a piece of the market in the field of video calls and live broadcasts.

The company that repeats the most on the list is Apple, which boasts the presentation of the iPad in April 2010, Apple Watch in April 2015 and AirPods in December 2016. Let us remember that every year the company with the bitten apple announces a new version of the different devices that they have in their catalog, and this year will not be the exception.

In addition to the above, Fortnite, TikTok and Disney + appear as the newest applications on the list, this taking into account the date the product was launched in the first country. Could it be that all these apps will be able to dominate the world even more for the current decade?

The day a Norwegian decided to build his own Lamborghini Aventador in his garage ... even with IKEA parts!

Apple is destocking its iPhone 12, their price collapses (Amazon)

Chrome will make it easier to recover tab groups