Samsung is getting ready to give more potential to its Galaxy Buds headset line. The South Korean giant’s next step seems to be to provide its earphones with the necessary certification so that they can be submerged.

This information was taken from a patent recently submitted by Samsung to the competent authorities. A document that looks at hypothetical waterproof Galaxy Buds.

Currently, the highest IP certification included by Samsung in its wireless headset is IPX7. This certification tells the user that the product can be submerged up to one meter deep for 30 minutes. 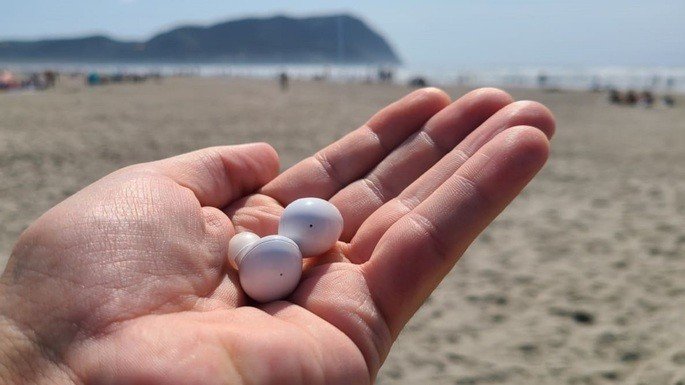 However, this seal does not mean that Galaxy Buds can be swimmates. In fact, Samsung strongly advises against swimming with a pair of its wireless headphones.

Samsung is now working to put this paradigm in the past. With the patent that we are now making known, the South Korean technology company has obtained legal approval to develop and market a waterproof certified earphone.

In effect, upcoming Galaxy Buds will benefit from a certification above IPX7. We do not know, however, what level of certification Samsung aims for its new product, but it will be higher than what it currently sells.

Additionally, the South Korean has designed a removable tape that the user can use when swimming with their Galaxy Buds. This accessory should be worn around the neck to ensure the earphones will remain secure while swimming.

Samsung wants to collect fitness data with its headset

Not sticking to the waterproof certification, Samsung hopes that Galaxy Buds can replace a smartband during water sport. To this end, the company will put sensors in their headphones that we usually see in sports accessories.

Indeed, the future Korean headset will be able to collect data such as calories burned and the user’s travel speed. Something that would help the latter to have a more concrete idea of ​​their performance in the water.

This patent further mentions the inclusion of multiple microphones, touch controls and a dual speaker system. However, the document does not expand into further details.

Finally, it is important to emphasize that a patent does not imply the obligation to develop and commercialize the product. We know that Samsung has the rights to develop it, but that will always and only depend on your will.

The water of the Loire suddenly turned red: we explain why

This is Black Shark 4, the new 5G mobile for gamers with pop-up buttons

Google will change the way you share web pages from Chrome