Huawei is taking advantage of this end of the year to release its new MateBook 14s, certified Intel Evo and above all without the faults of its predecessor. Also, Huawei continues its momentum with a successful laptop.

2021 will end and no, Google is still not part of the horizon of Huawei. While the Chinese manufacturer still cannot work with Google, Huawei has, however, the right to work with Qualcomm, Intel, AMD or Microsoft… Go figure it out.

There is always that Huawei continues to diversify and if we associate the Chinese manufacturer less with the world of smartphones, it is more and more associated with the rest of the technological products ranging from the connected watch to computer products via the connected home. 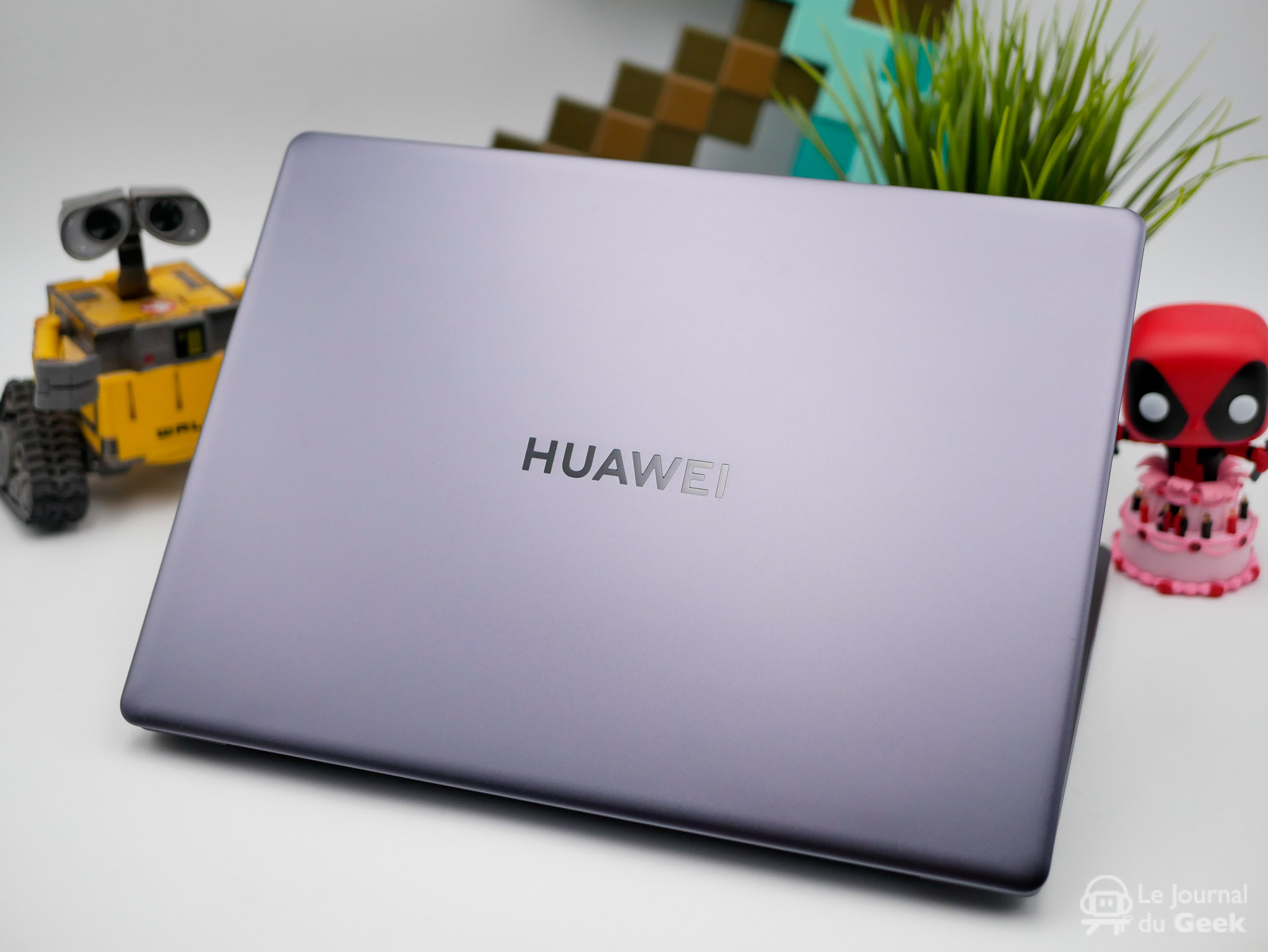 At the end of the year, when Huawei presented two high-end monitors, here is the new MateBook 14s which brings its share of novelties compared to its predecessor. We will of course note the 11th generation Intel processors but also a 90Hz screen, the new placement of the webcam or even the 90W charging support. We tested it over the last two weeks. Verdict.

Today, we are interested in MateBook 14s. We start with the design that takes the codes of its predecessors with a strong Californian inspiration. With a successful finish, Huawei continues to offer a computer running Windows 10 (Windows 11 compatible), with standards close to what Apple offers with its MacBooks, eternal references for the Chinese brand.

It is all the more impressive for a mid-range laptop to find such a finish, often reserved for high-end computers in general. Sober and elegant with an aluminum dress on the outside, there is a beautiful screen in 3: 2 format and above all with a refresh rate of 90Hz to ensure more fluid display, an 11th Intel Core i5 / i7 processor generation, the keyboard is always backlit and when it comes to internal memory or RAM, Huawei has not skimped with more than correct capacities. 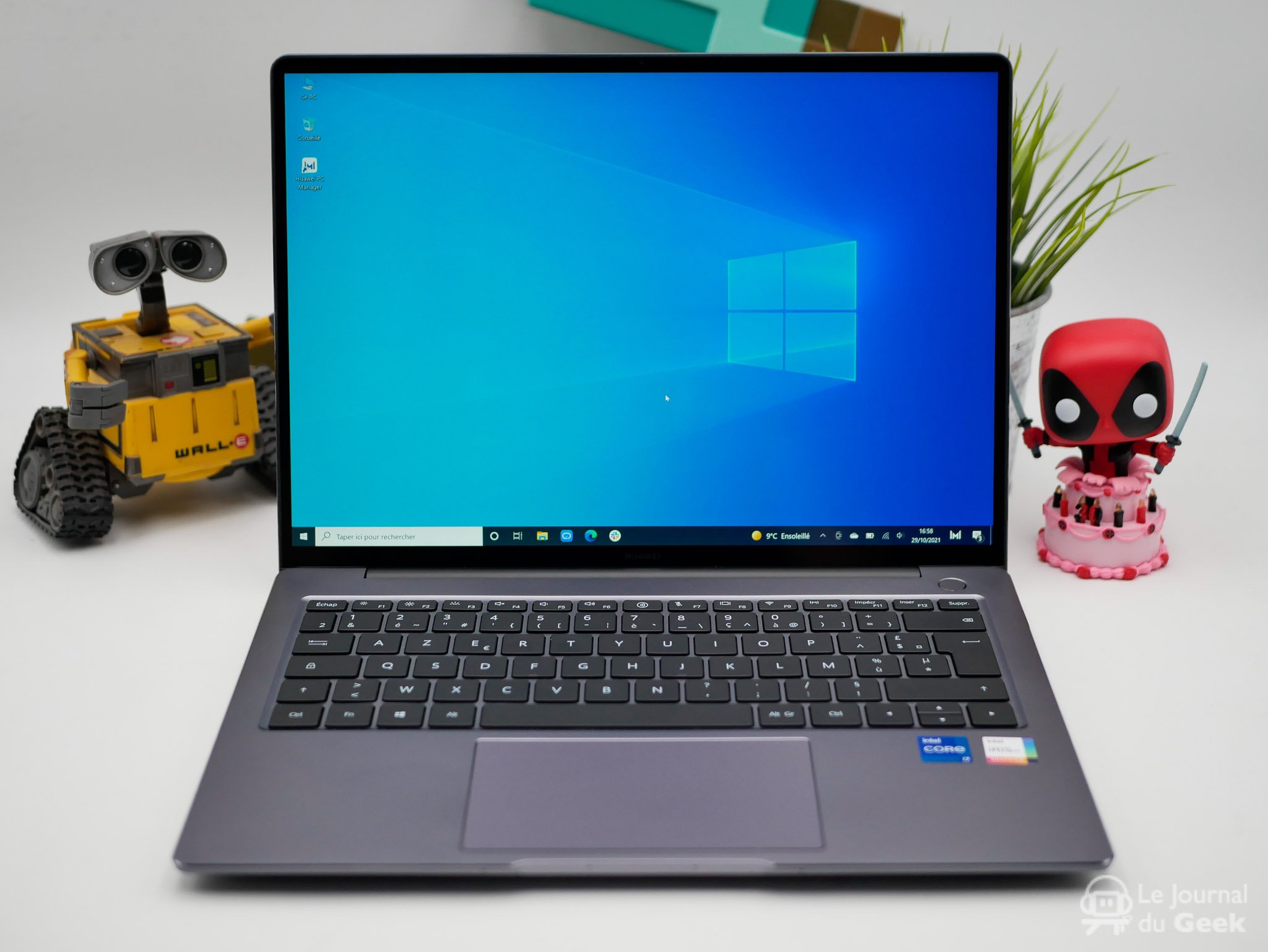 As a reminder, since the beginning of the MateBook, Huawei has always made it its mission to offer the equivalent of Apple’s MacBook Pro but under Windows. On this point of view, apart from the brand and the analogy that can be drawn between MacBook and MateBook, it must be said that Huawei was not mistaken and continues to succeed in its bet from an aesthetic point of view. .

It is recalled that Huawei laptops continue to offer its Huawei Share technology which works like Apple’s Airdrop with its entire ecosystem. Also, if you have a recent smartphone from the Chinese manufacturer, this allows you to easily transfer content between the laptop and the smartphone.

Like last year, failing to compete with Apple’s macOS, Huawei is betting on a particularly attractive hardware part such as this almost flawless finish, even at this price level. With a 14-inch panel, the screen edges are thin and the icing on the cake, Huawei has finally heard the feedback from “Everyone” since the webcam is no longer located under a key on the keyboard but above the screen. ‘screen at the top edge of the screen. With a lighter weight than its inspiration, the Huawei MateBook 14s is available in a Fir Green or Space Gray version. The design hasn’t really evolved since the first model. It remains thin in itself with a thickness of 16.7mm (against 15.9mm last year). 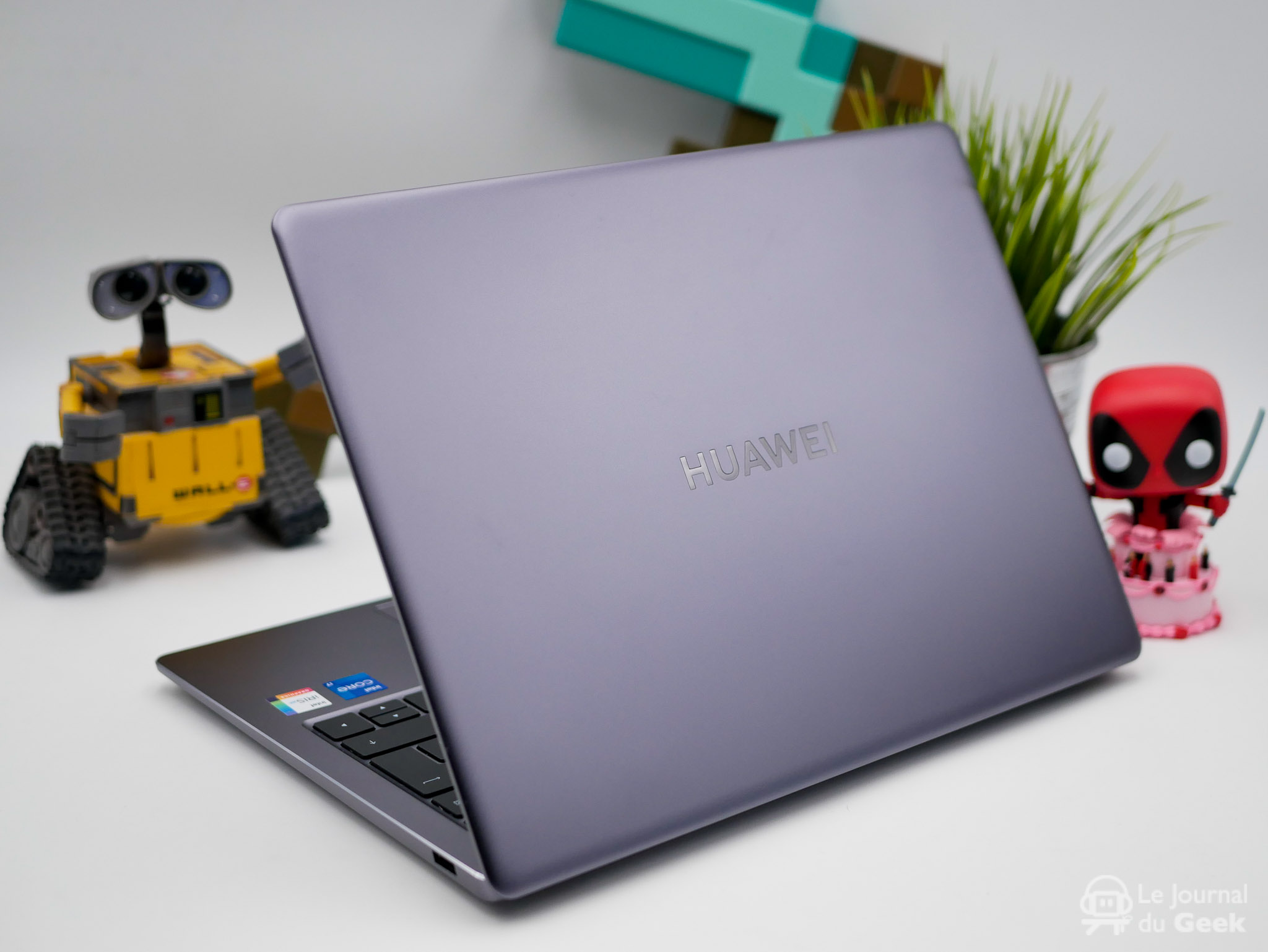 For the rest, it is only positive points, the keyboard is always so pleasant and responsive. The keys are large and offer sufficient travel to have a flexible and fast typing. The spacing between the keys is ideal, it is neither too tight nor too far apart, you get used to this keyboard very quickly. There are also black keys that contrast better with the backlight. It may be harmless but we have seen silver keyboards that become illegible when the backlight is activated. The trackpad is large enough and optimized to have a good experience. Likewise, at the top right of the keyboard, there is a physical fingerprint sensor that works extremely well. If there are two USB-C ports on the left and a USB-A port on the right, we would have liked to see Huawei finally offered a USB-C port on the right in addition to the USB-A port, if only for charging by example. On the other hand, what a good idea that this HDMI port on the left which eliminates the need for the additional dongle of its predecessors.

While the screen edges of the MacBook Pro have finally changed with the arrival of the 14 and 16 inch versions, the screen edges of the Huawei MateBook 14s remain thin. The screen itself still represents 90% of the surface, which is good, very good even. They are not necessarily the thinnest on the market, but they are among the thinnest on the market. The MateBook 14s offers a screen with a diagonal of 14.2 inches in 3: 2 format and a 2.5K definition or 2520 × 1680. It is therefore a screen that offers more display area compared to a 16: 9 screen, which is so much more practical for everyday work. If we have not had to complain about the colorimetry of the panel itself, we will always note a luminosity that deserves more. 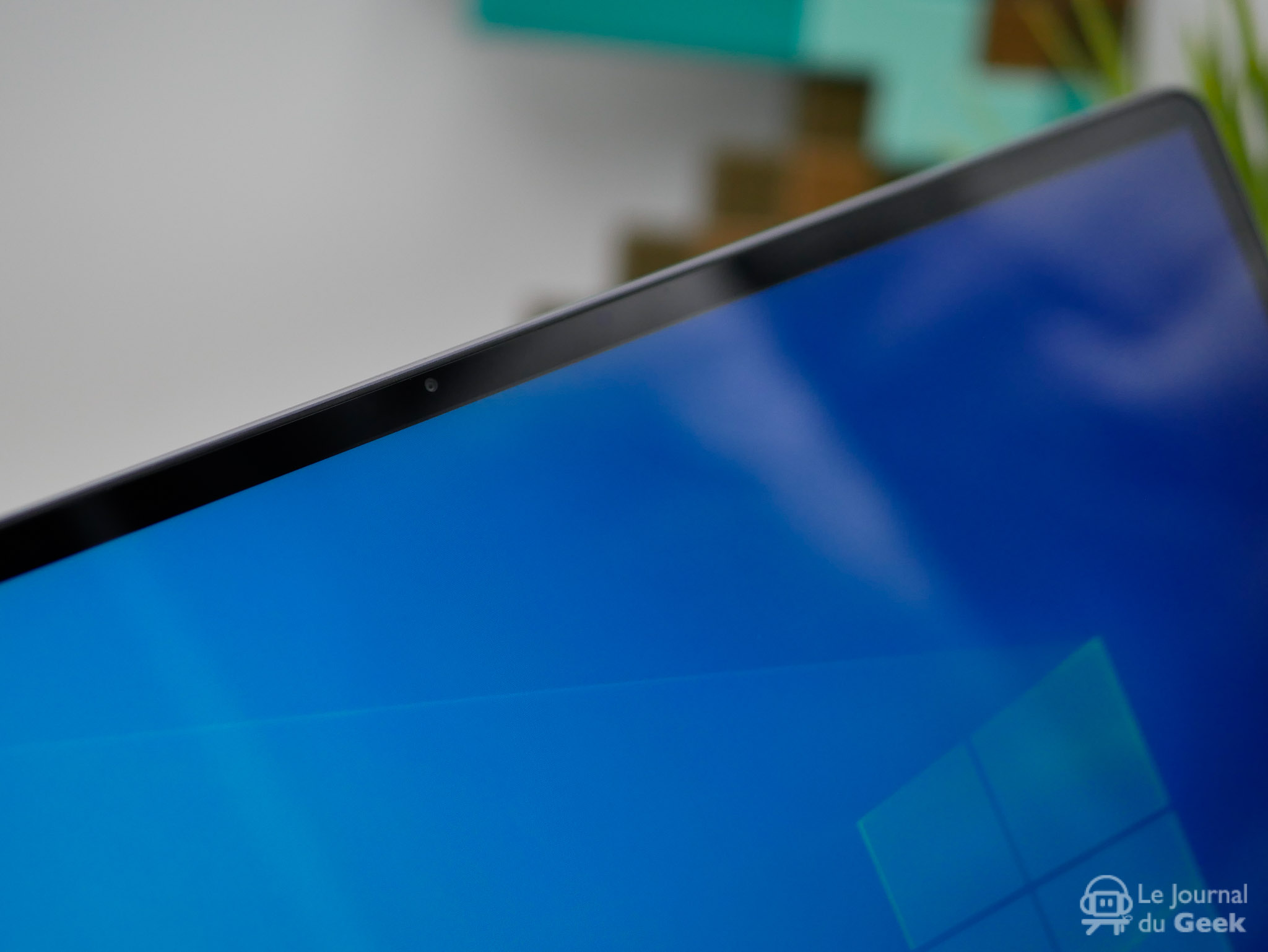 Because the screen is touch-sensitive, the screen is necessarily brilliant and on a daily basis, it can be annoying and you will have to be careful of reflections. As we said above, the brightness is satisfactory but we will still note some quirks at the level of the auto mode which promotes energy saving with a display that is often too dark. And as a reminder, as it is a touch screen, you will have to be careful of fingerprints even if we find this feature super practical in real life.

Obviously, we cannot miss the fact that the Huawei MateBook 14s offers a screen with a refresh rate of 90Hz, which is not nothing for the overall fluidity of the user experience on a daily basis. So yes, we know that the MateBook 14s is not intended for video games but this refresh rate can also be seen on the mouse cursor for example or on the scrolls of particularly long web pages. It will not revolutionize the genre but its presence is a real plus. 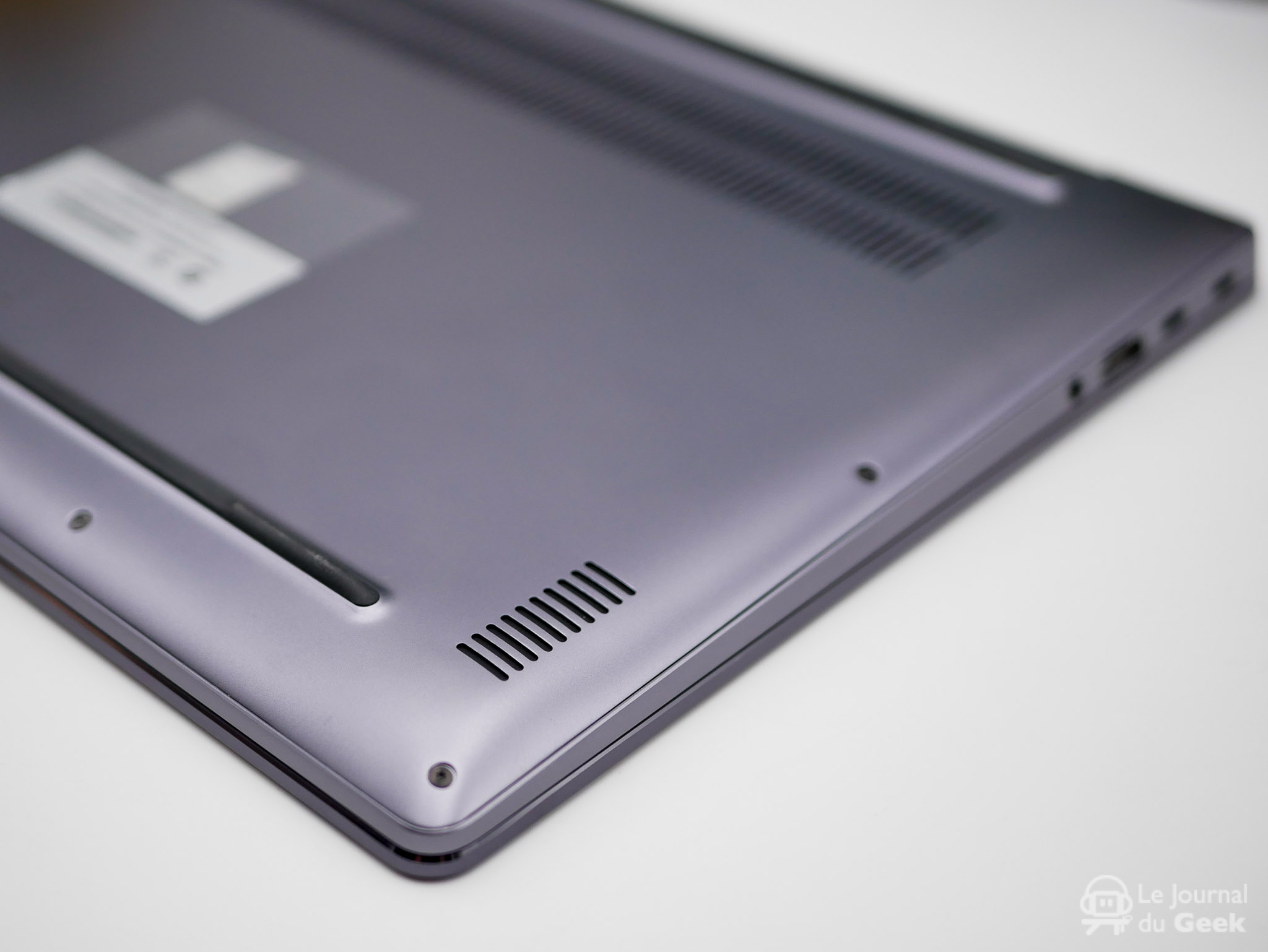 As for the audio quality of the on-board system on the MateBook 14s, if there are no less than 4 microphones, we appreciate the arrival of 2 additional speakers, for a total of 4 speakers and the sound quality continues. immediately feels. The sound is powerful and fine with more details compared to its predecessors, although there is still a certain lack of bass compared to the direct competition.

The version we tested is the version with an 11th generation Intel Core i7 processor with 16GB of RAM, 1TB of SSD and an Intel Iris Xe Graphics graphics card. To be honest, once again, everything will obviously depend on your uses and your expectations. For us, the Huawei MateBook 14s is a laptop that targets a target looking for a portable device that excels in both office automation and media consumption. While it will be able to do so-called simple retouching and video editing, the Huawei MateBook 14s is clearly not aimed at graphic designers or professional video editors.

Suddenly, when we stay in the target that Huawei is targeting, it is needless to say that the MateBook 14s is doing with the honors. Huawei’s computer is Intel Evo certified and offers an Intel Iris Xe graphics card that holds the load very well on all our classic uses. Without going into details, whether it be office automation, the Internet or the consumption of multimedia content (in 4K), the MateBook 14s did not flinch. 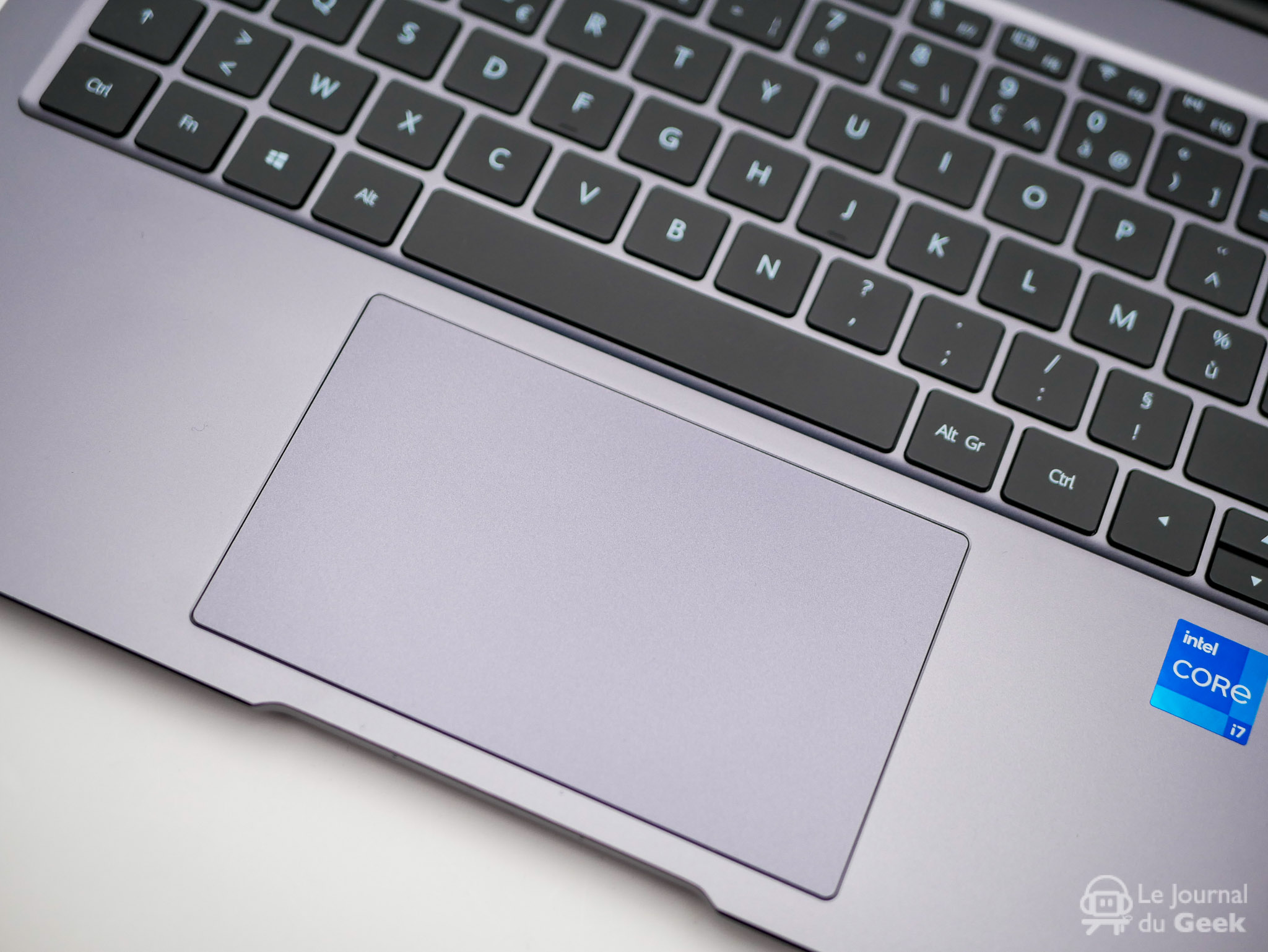 We continued with professional photography and once again, whether it was Photoshop or Lightroom, the two programs carried out our work without flinching. Now we are not a graphic designer either and this is not the target but for basic and classic work, the MateBook 14s will run. We then used Première Pro and once again, no unpleasant surprises but we prefer to specify it, we only had fun with 3, 4 video tracks and 2 audio tracks max, all on a project of about 12 minutes. We remind you that contrary to what one might think, video editing is above all a matter of a central processor and not of a graphics card.

Overall, the MateBook 14s remained silent and it was only when we dabbled in some really greedy apps like Premiere Pro or a few games that the machine blew up. This remained more subdued than on the MateBook X Pro, but like the latter, the MateBook 14s is clearly not a machine made for pure performance. In any case, if you want to play, we can only advise to go through cloud-gaming in order to take advantage of the machine’s WiFi 6. Dirt 5, FIFA, Hades via Stadia or Xbox Game Pass, it’s always nice to play AAA games on a machine designed to be especially nomadic. 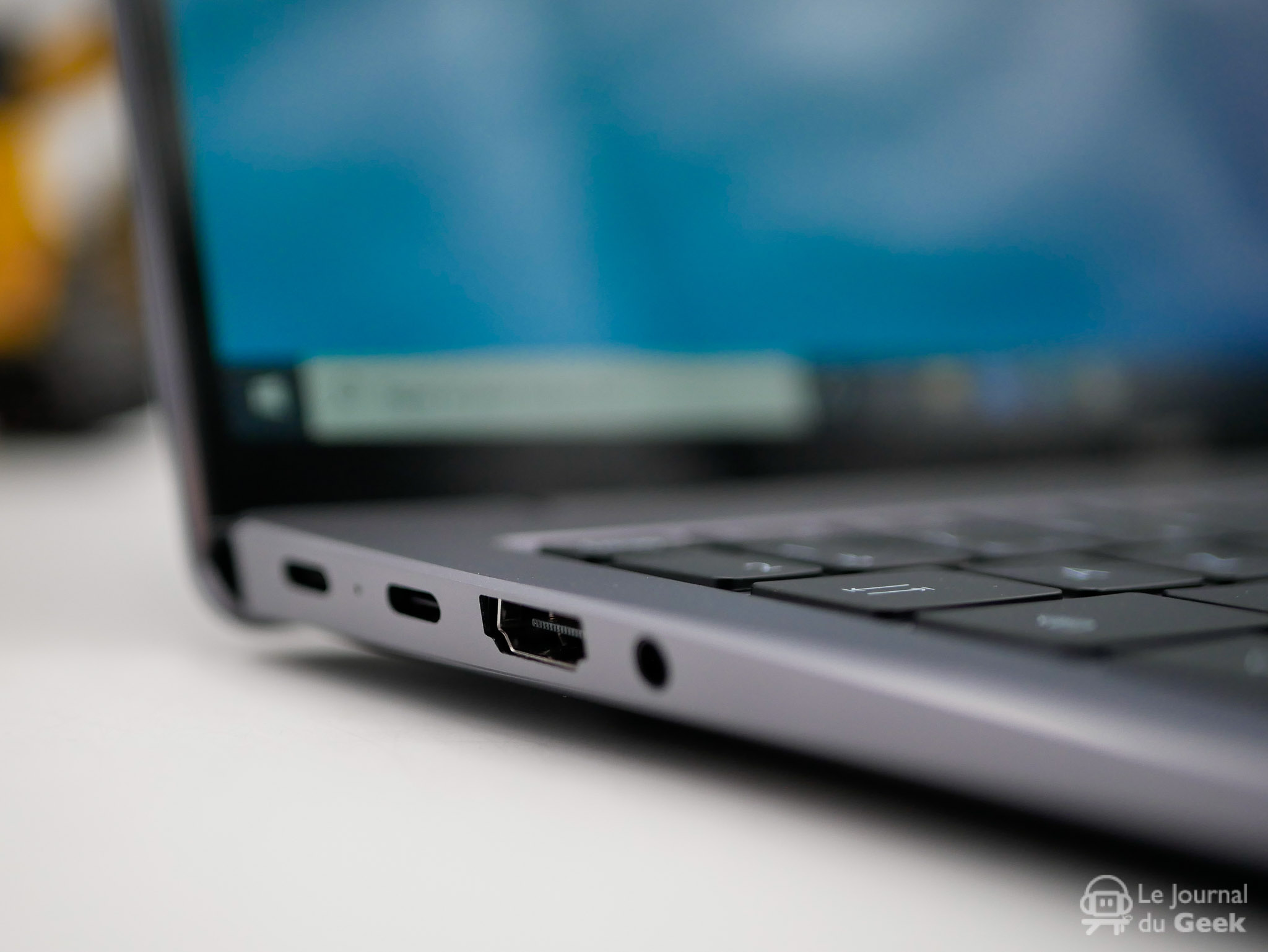 And finally the autonomy, we noticed that apart from the battery power and fast charging, Huawei does not really communicate on the number of hours that its new Huawei MateBook 14s can hold. This does not matter since in our tests, with a brightness that varied between 50% and 70%, we had about 9 hours of battery life with a screen refresh rate of 90Hz and an hour more when it was. at 60Hz. In our uses, we could count on Edge, Spotify, Slack, Discord, WhatsApp, Signal and video. So, we were confident that the MateBook 14s is able to easily last a day but, once again, everything will depend on the applications we use. On the other hand, from 0 to 50% of battery in about 30 minutes of recharging, it is really appreciable. Allow a little less than an hour and a half for a full charge, which is also appreciable.

Instagram now allows you to create story threads with your followers

On Facebook, the visibility of hate speech has fallen by 50%