We tested the sleep headset that promises to get back to sleep, the UrgoNight. After several months of use, did it wake up the sleeper inside us?

On average, we spend almost a third of our life sleeping. However, 70% of French people admit having already encountered sleep problems. Between those who feel they do not get enough sleep (1 in 3 French people), or even people who have problems falling asleep or staying asleep (1 in 5 French people), sleeping well seems to have become a luxury that does not benefit everyone . This is all the more convincing in these times of health crisis, when the multiple containment measures and teleworking has impacted the biological rhythm of many of us.

Sleep better, that’s what the company promises us URGOTech With l’URGONight, a headset that promises you to fall asleep 45% faster, 57 minutes more sleep per night and a number of nocturnal awakenings reduced by 53%. We are not praising a sleeping pill but rather a connected headset, a daring attempt at a time when it is suggested rather to avoid tech objects as much as possible before falling asleep. What if, paradoxically, technology was the solution to your sleep problems?

Unlike some competing brands like Dreem and its sleep band or the many sleep trackers, Urgo’s helmet is not worn at night, but rather during the day.

The operation of the headset is based on neurofeedback, a method widely proven in sleep centers around the world. To popularize, this is a method allowing you to have visual and / or sound feedback as soon as you produce a brain wave conducive to sleep. URGONight therefore promises to re-educate our brain to produce certain waves, mainly SMR waves (sensorimotor rhythms), also called low beta waves, and between 12 and 15 Hz. These waves, which we produce when we are awake, allow us to ” improve the quality of sleep after dark, according to clinical studies.

Thus, through the exercises offered on the companion application, you will train yourself to gradually identify which thoughts or mental strategies allow you to generate more visual and sound signals, and therefore SMR waves.

The exercises are rather simplistic, and make you generate stars in a sky, grow leaves on a tree, make jellyfish disappear… The application rewards efforts by awarding points when you succeed. You then have the right to a summary of your session. The goal of these exercises, the promise of URGONight: to teach our brain to produce these waves that promote good sleep after dark. So it works ?

The helmet itself takes on a look that has become quite common in the world of high-tech mainstream. Its white plastic alloy topped with gray fabric in fact strongly reminds us of certain products such as connected speakers from Google, for example. Everything is perfectly finished, and above all, rather comfortable when worn. 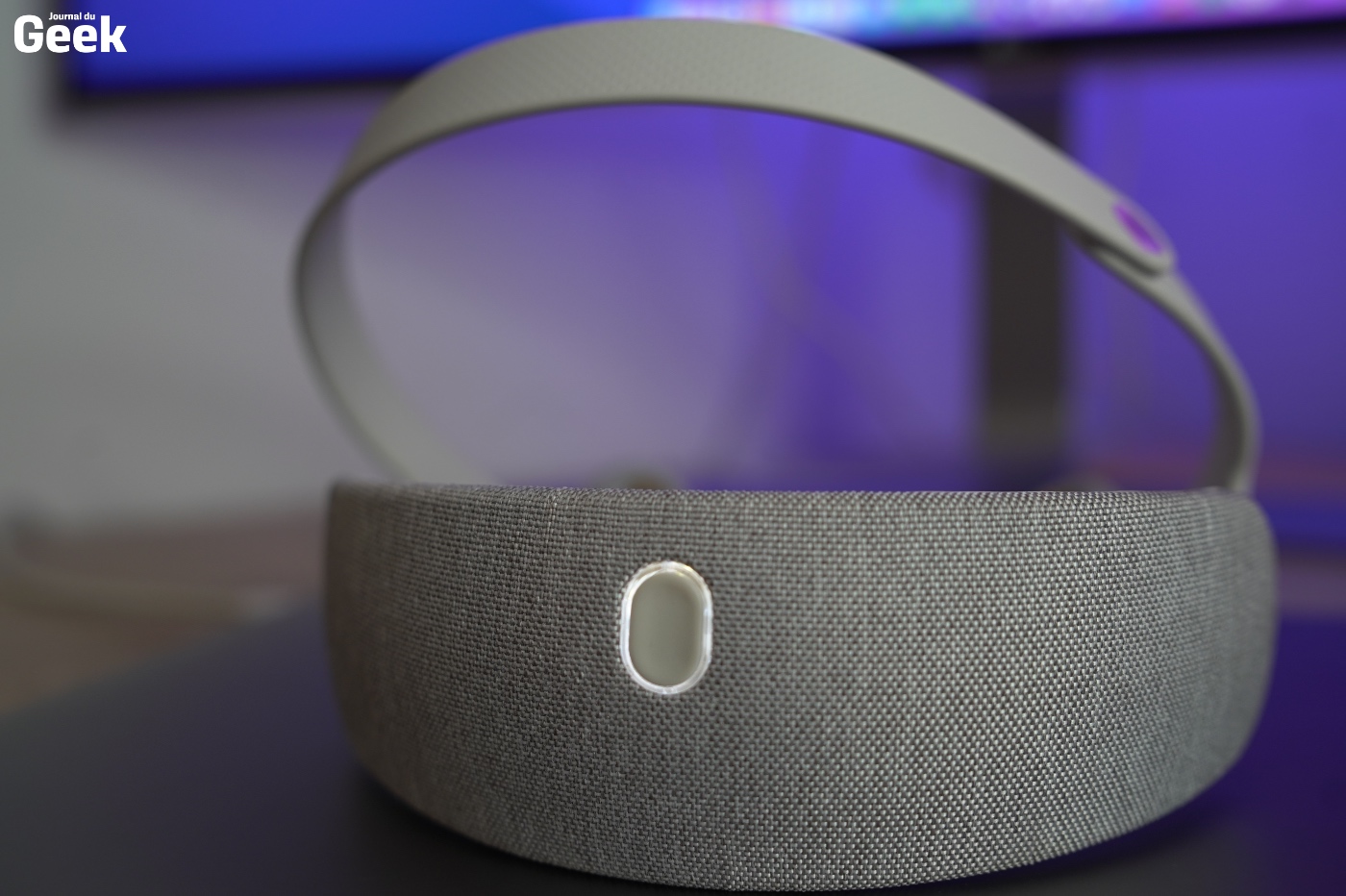 On the front surface of the helmet, there is a single button, allowing both to turn the helmet on and off, but also to activate its Bluetooth connection in order to pair it with the URGONight application, available both on iOS and on Android. URGO is reassuring about our personal data: they do not leave the application. They remain anonymous, have no other interest than to improve the feedback algorithm and cannot be exported. 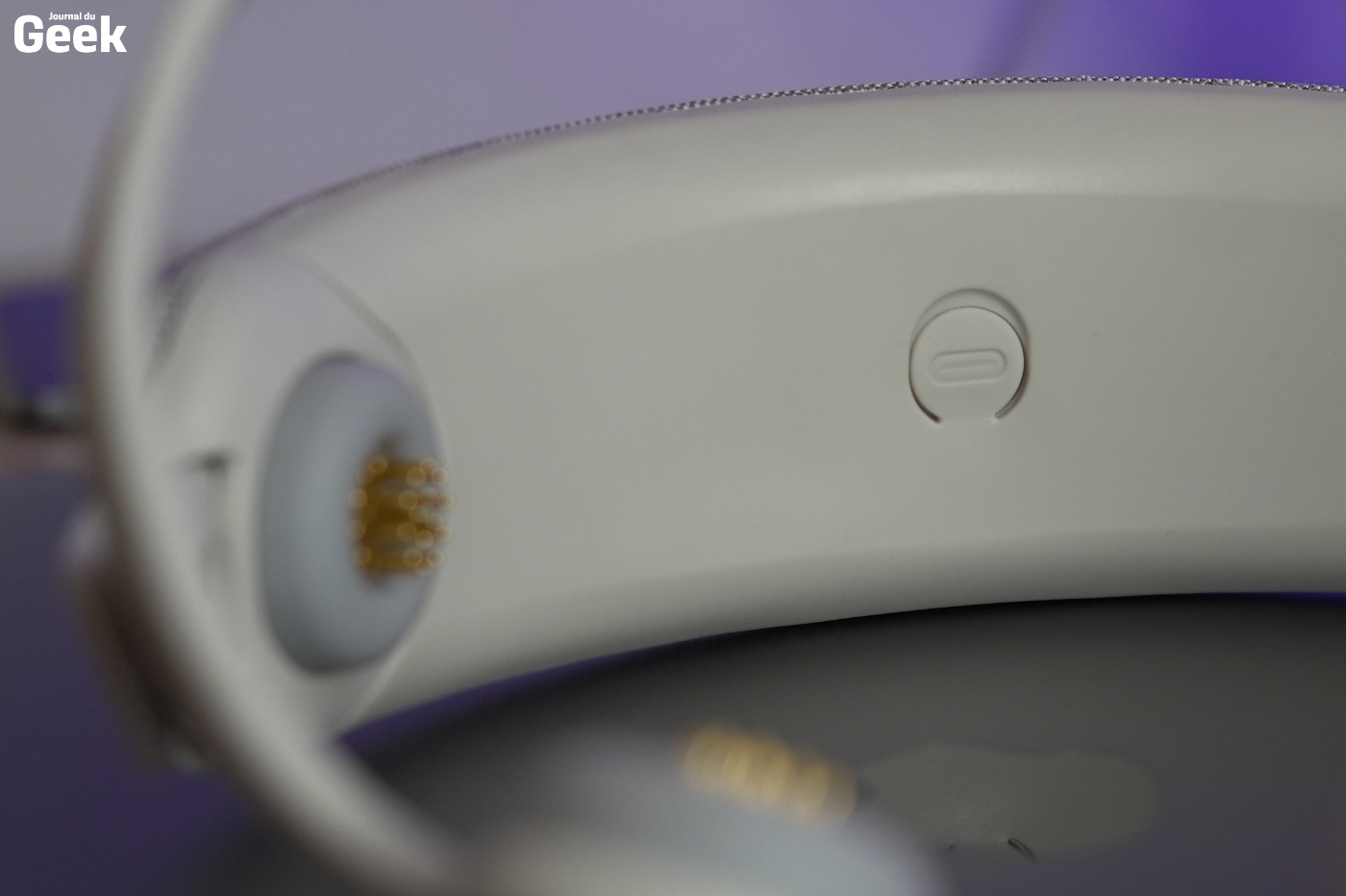 Hidden at the back, there is a USB-C port for charging, with an autonomy capable of enduring about three workouts. The URGONight includes above all four covers placed on its four sensors that should be removed before putting on the helmet. These sensors form a miniature electroencephalograme device replicating the equipment that you might benefit from in a sleep center. 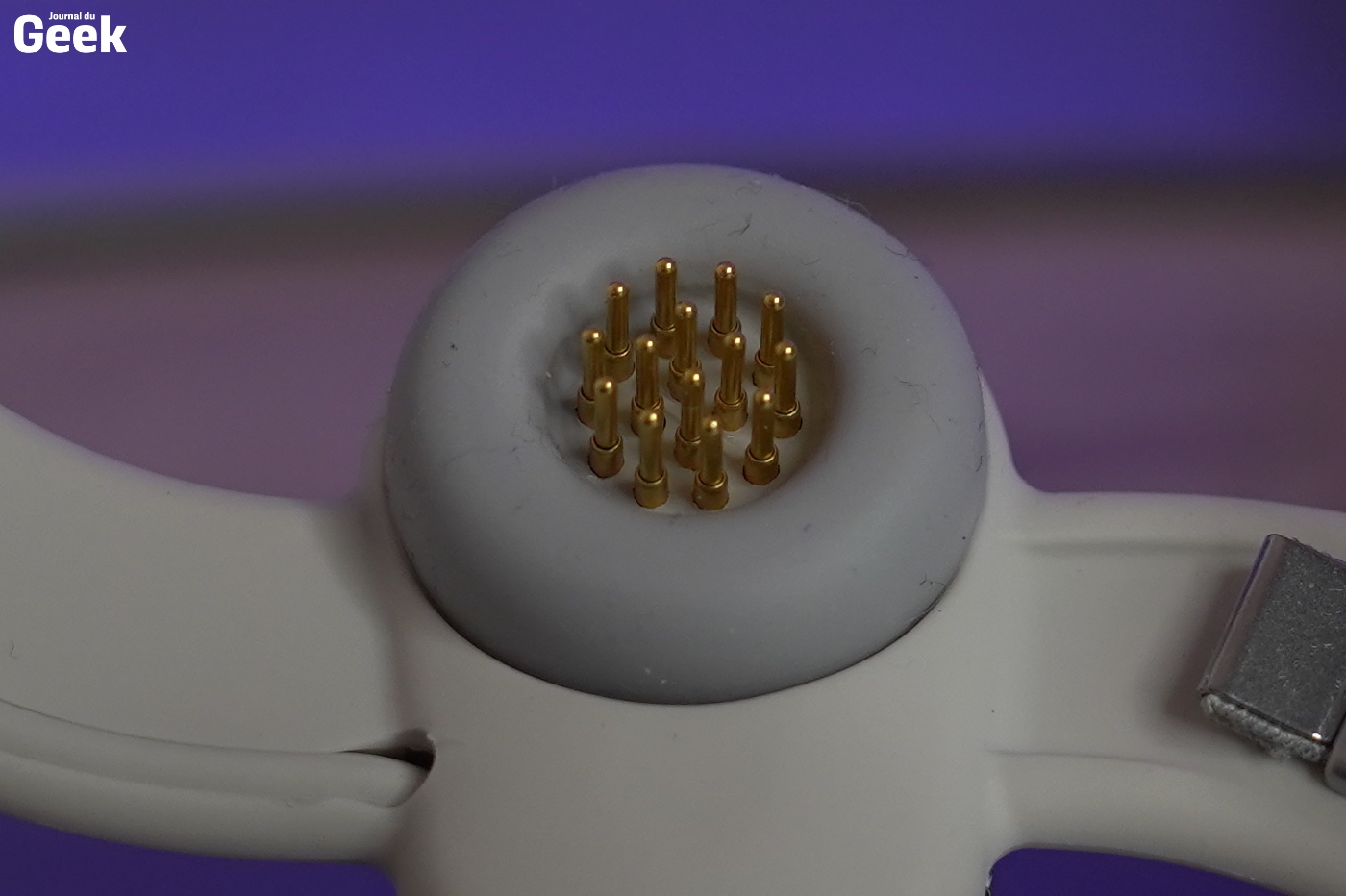 Finally, the helmet is quickly installed on the head and adapts to all skull sizes thanks to its headband system and a solid elastic. To know if it is tight enough and well positioned, you have to be able to feel the sensors against its framework.

Once correctly positioned on your head, the helmet is rather comfortable and light, although we will not go so far as to sleep with it either. That’s good, that’s the goal: URGONight is worn during the day, during short sessions of 15/20 minutes. This is where the exercises come in to help you get back to sleep.

Before giving you my feedback, know that this is only a purely subjective feeling, and absolutely not a scientific test. These data are therefore mainly taken from my experience with the headphones, and do not necessarily correspond to the use you would make of such a product.

I therefore performed on average 2 to 3 sessions per week for several months with URGONight. Also note that, during the summer, I let go of the helmet for several weeks before resuming the exercises at the start of the school year, so as to simulate the use that an average user could have, depending on the period when he acquires the URGONight. . 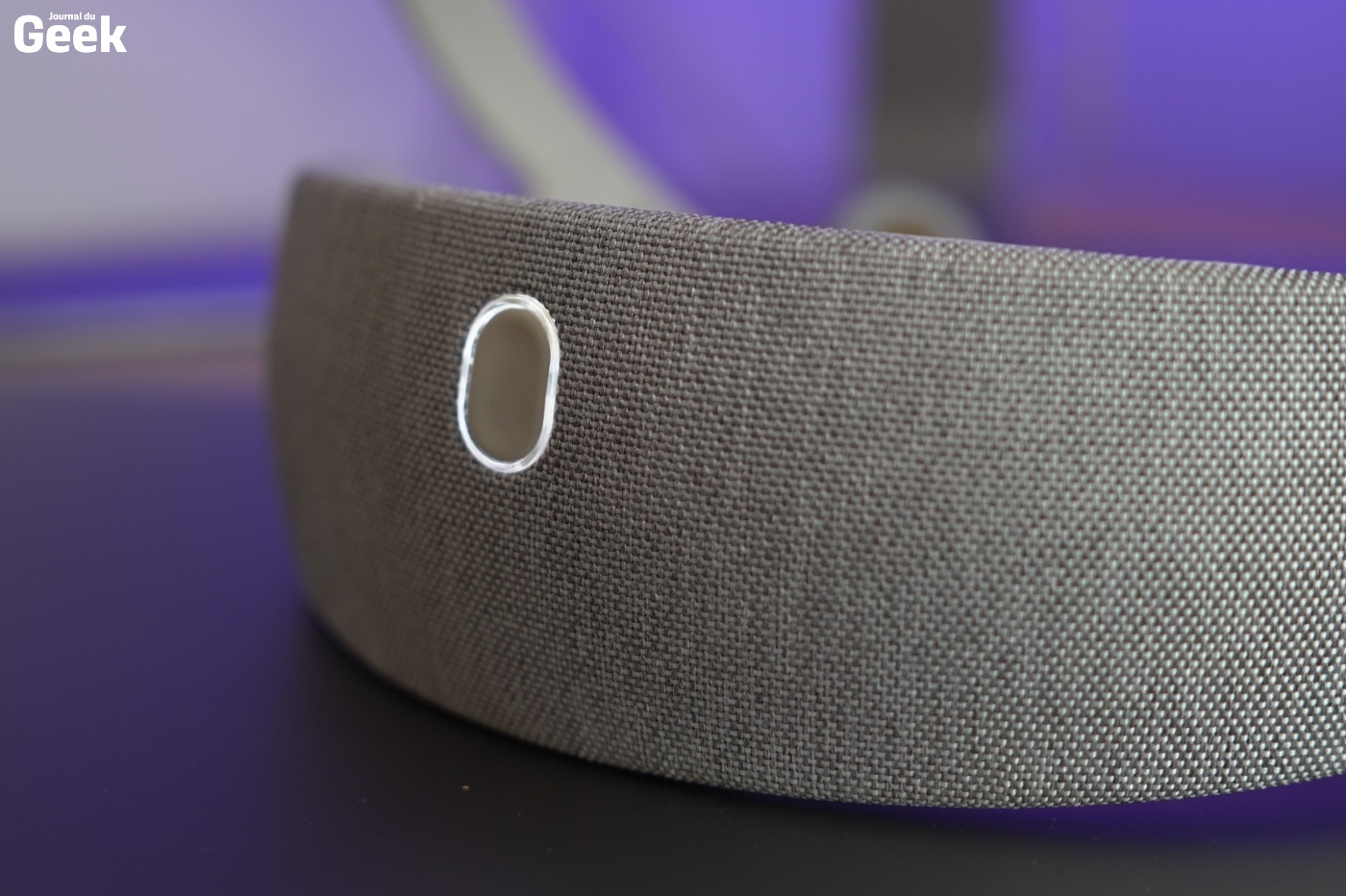 Let’s be honest: the first sessions seemed really tedious to me. The exercises are certainly well thought out and benefit from a nice design, but, at the beginning, we do not know how to generate these famous SMR waves and overcome the exercises. At first, you usually manage to progress without really knowing why, which can be a little frustrating in practice.

We then try to close our eyes, but it is not the right method. Worse, it could even distort the results and make you think that you are progressing when you are not. URGONight is indeed used during the day because it requires having an active and conscious mind to learn how to generate these SMR waves.

After this false start, we finally start to find some techniques that work. Remembering certain moments can work, but it is not systematic. The technique I quickly adopted is simple: fix your gaze on a point as far away as possible. The exercises are linked, and we gradually understand how it works. Getting to grow virtual leaves in trees on the app, okay, but what about once in bed, without the headset on your head? 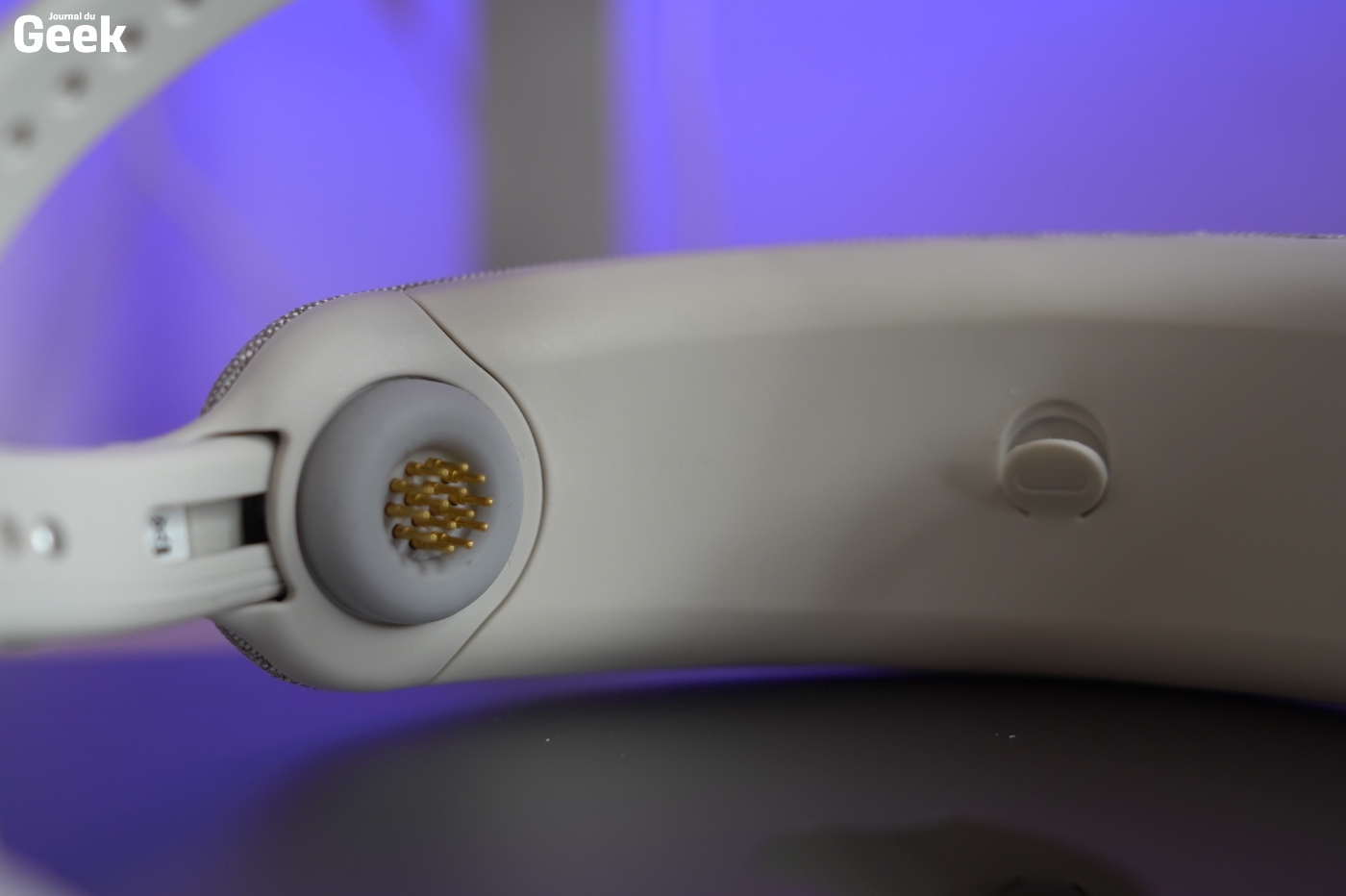 During the first weeks, the benefits were not really felt. But gradually, I started to feel the first effects. I fell asleep much faster, especially on the days I had used URGONight. Coincidence? Then, during the summer period when I stopped using the headphones for several weeks, I noticed that my nocturnal awakenings were much less common. A good point.

It remains difficult to establish concretely the benefits brought by URGONight over the last few months. External factors have indeed come into play at different times, preventing us from really measuring progress empirically. Nonetheless, the overall experience seemed quite satisfactory to me.

Today I have the feeling that I take less time to fall asleep, and my nocturnal awakenings are especially much less frequent than before. Above all: these benefits seem to last over time – at least for now – even after you stop using the headset. You just have to remember the technique that worked on the application and replicate it during your days, without a headset, to promote sleep in the evening. 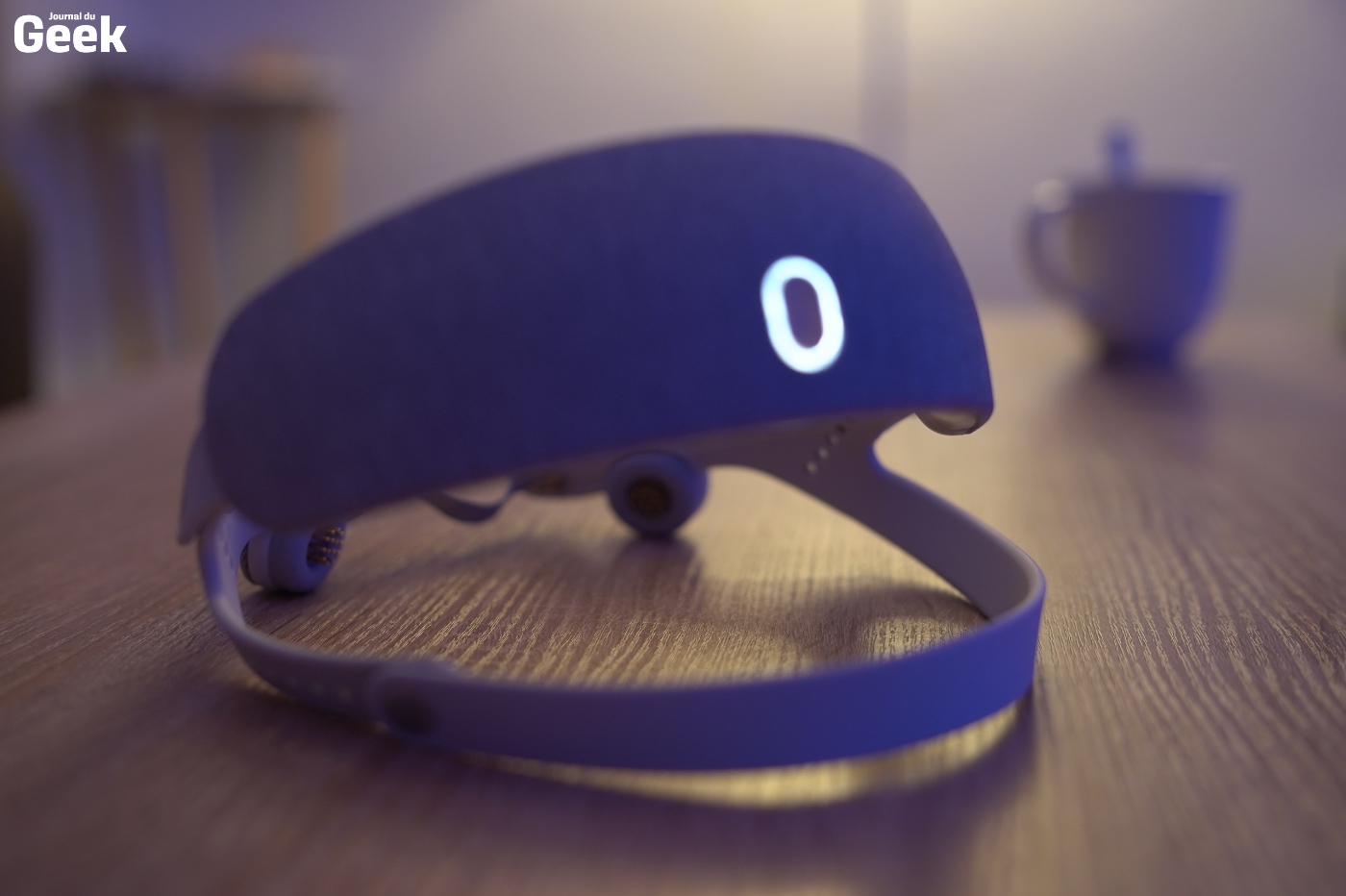 UrgoNight estimates that it is necessary to use the helmet for at least a month at the rate of 3 sessions per week to start measuring the first effects. This therefore requires a minimum of rigor on the part of the user. And for those who wish to go further with more empirical data, here is the summary of the study conducted by URGO between April 2019 and December 2020.

This study was conducted in the Netherlands and led by Dr. Martijn Arns, specializing in neuroscience research to improve our understanding of the brain and its functioning, but also in applied neuroscience to evaluate and propose neuromodulation techniques to the Institute. de Recherche Brainclinics, an independent research institute.

It was carried out on 37 voluntary subjects who declared to be dissatisfied with their sleep, on the basis of 40 to 60 sessions carried out with the URGOnight neurofeedback program, a guided and personalized brain training technology dedicated to sleep.

The objective of this study was to validate the effect produced by training with URGOnight on the quality of sleep of subjects questioned and subjected to a neurofeedback program. Based on the concept of feedback, neurofeedback is a gentle method that uses brain activity as a parameter, which can be measured using an electroencephalograph (EEG). Thus, it is possible to improve the quality of our sleep sustainably: by training SMR waves (sensorimotor rhythms) during the day, we strengthen the sleep spindles responsible for protecting our sleep at night.

The URGOnight home sleep rehabilitation program using the neurofeedback technique was developed by URGOtech in collaboration with sleep experts and engineers. The clinical study was developed and carried out in collaboration with the Brainclinics research institute and the subjects’ sleep quality was assessed qualitatively via self-assessment questionnaires, and quantitatively via actigraphy readings:

Thanks to the URGOnight neurofeedback program, the results of this study show that:

How to generate images with artificial intelligence from text

Guidelines in industry transformation: ZDK defines strategic goals up to 2030

High speed laser could change the life of remote areas