Realme continues its insane rise. The Chinese brand presented in mid-November a brand new model of its GT range, the GT Neo 2.

The Realme brand is perhaps not the most famous in the eyes of the general public, far behind Apple and other Samsung. But the young Chinese manufacturer intends to catch up. Launched in 2018, the latter is already the sixth largest seller of smartphones in the world, and the brand aims no more and no less than the world top 5 and the European top 3 in the coming years. A clear ambition, which pushes the young company from the Middle Kingdom to produce more and more models, in order to attract new customers.

In this galaxy of models, the GT Neo 2 can be seen as yet another smartphone, which differs only in a few details from the others. But the latter has several features that have something to appeal to the greatest number. While it is now very difficult for a manufacturer to enter the mid-range phone market, Realme is giving itself the weapons to succeed with this phone which has already attracted more than a million Chinese.

With its arrival in France on November 15, the brand offers an affordable product, around 500 euros according to the configurations which has everything of a more upscale model, a real flagship killer On paper. With its Snapdragon 870 chip which also equips the Oppo Reno 6 Pro, this phone offers a powerful processor, which, although it is not revolutionary, allows to use the phone without the slightest problem and to push the specs a little more. away with “GT” mode.

Presented in three colors, two of which are quite sober in shades of blue and black, Realme has played the card of originality with the third color and a surprising visual. Called “Neo Green”, it tends towards a spicy green, which cannot go unnoticed. We love it or hate it, but it is a gamble attempted by the brand to stand out in the fray.

Before getting to the heart of the matter, here is the Realme GT Neo 2 technical sheet to see in detail all the specifics of this phone.

On the face of the phone, there is a 6.62-inch Samsung AMOLED E4 panel. With thin borders that you quickly forget, Realme does not reinvent the world, but offers something effective. Note the small punch for the front camera is located at the top left of the screen and not in the center as it is common to find it. This positioning allows for better immersion in the screen, but can be inconvenient when using the camera. It is easier to run your finger in front of the camera while holding the phone with this positioning, especially during video calls.

For the rest the screen of this Realme GT Neo 2 embeds advanced technologies, such as a refresh rate of 120 Hz, a feature which has just arrived on the iPhone 13, premium model if there is one. But in addition to this refresh rate, the Realme GT Neo 2 offers a touch sampling rate of 600 Hz. Less well known, this feature makes the phone ultra responsive and the screen is very (too sometimes) sensitive to the slightest pressure. . A real treat for mobile gamers, but a plus that may not be visible enough on a daily basis. The changes are hardly noticeable in everyday use, and you have to really push the phone to its limits to feel a clear difference from the competition.

Under this screen, Realme boasted of having managed to integrate a brand new cooling system that relies on a stainless steel structure and thermal paste including diamond dust. This new process seems very successful. During our test, the phone (almost) never warmed up, even when using the “GT” mode which is supposed to get the full power of the phone. 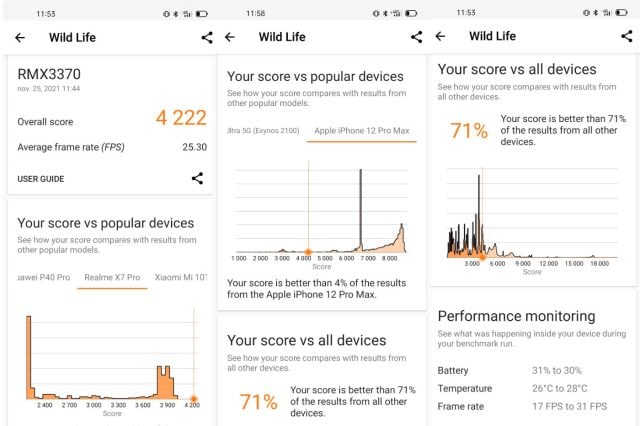 Next to this new cooling system, Realme places within its GT Neo 2 a 5000 mAh battery which can largely last the day with moderate use. If you pay attention to your consumption, you can even reach the two days before going through the recharge box. Note, a small detail always nice, Realme offers a small animation on the screen during the recharge. A little nothing that is not decisive, but which shows the attention to detail by the Chinese firm.

Photo: no revolution, but no disappointment

Regarding the photosensors of the Realme GT Neo 2, the company from Shenzhen did not want to do anything extraordinary and is therefore satisfied with a triple sensor with a wide angle of 64 MP which is intended to be the sensor. main. With a 26mm lens and an aperture of f/ 1.8, the latter is correct, without offering stunning image quality. As for the second sensor, the ultra-wide angle, it offers 8 MP and an aperture at f/ 2.3. Note that there is a clear difference in colorimetry between the two sensors. The ultra-wide angle will offer much “colder” images while the main sensor tends to boost the tints to make the photos more “flashy” to the detriment of realism, some would say.

Finally, the last sensor on the back of this phone, is a very small macro lens of barely 2 MP, it allows you to take “macroscopic” photos, but it is not to be put in all hands. Indeed, in the absence of an autofocus it will be necessary if to resume twice (or more) to have a correct photo, whose focus targets the right area. It’s a shame that Realme didn’t push the capabilities of this sensor a little further. Especially when we know that the macro sensor is becoming a benchmark for mid-range models instead of a telephoto lens which remains the adage of the most premium.

The real problems finally come when you decide to use the front camera. If the portrait mode of the latter catches up with everything, the 16 MP sensor placed on the waste corner of the screen is enough to disappoint the selfie pros. The latter is quite sad and the renderings are often very “white”. The colors are not there, a too dull side which is even more marked by the main rear sensor which on the contrary tends to boost the colors, sometimes more than necessary.

Overall, this photo unit is not revolutionary, it which had already emerged on other GT models of the brand. If the front lens did not convince us, the three located at the rear offer nice things and they are quite manoeuvrable. Special mention for the few photo editing options integrated by Realme. Everything in the sobriety, the mark manages to offer useful functionalities and is not lost in the thousands of options of photography. Ideal for retouching your photos “broadly”, all in a few seconds.

As for the rest of the phone, it’s important to note that the GT Neo 2 offers a dual biometric unlocking system. In addition to its fingerprint sensor under the screen, it is also possible to use Realme’s facial recognition system. A duo that must make more than one Apple customer dream, awaiting the return of Touch ID in addition to Face ID.

The latter can console themselves by telling themselves that their unlocking system is much more reliable than that set up by Realme. Because if the Chinese firm manages to offer almost instantaneous facial recognition, it is because it does not go very far in the analysis of facial features. The development of a “real” facial recognition technology being far too expensive for the firm. Regarding the fingerprint recognition system, the latter works well overall, even if you always have to remember to position your finger in the axis of the sensor, a slight offset will not allow the phone to recognize the fingerprint. presented to him.

Once inside the phone, we find the basics of Android, which are intelligently supplemented by the house overlay: RealmeUI 2.0. Designing an operating system that holds up is no easy task, and on this point, we must admit that Realme has won its bet hands down. With this OS that already equips a large part of the brand’s range, the Chinese company offers a powerful system, without getting lost in exotic functions that we would not be used to seeing on Android. An OS that will be very familiar to Oppo phone users, the two overlays being very similar, if not identical.

Finally, the last important point on this GT Neo 2, the GT mode. Present even in the name of the phone, the latter is not a novelty strictly speaking since Realme had already offered it on other models in recent months. Nevertheless, it is interesting to see its evolution over time. On a phone like the GT Neo 2, the latter isn’t really needed for everyday use, as the Snapdragon 870 chip makes the device run perfectly.

Finally, it is especially in mobile games that the GT mode does well. This high performance mode manages to give the phones a little more power in order to make use as comfortable as possible. If it brings a real boost in performance, this GT mode can, after long minutes of use, heat up the phone. If it’s kept light enough, Realme’s cooling system seems to show its limits when everything else on the phone is running at full blast. But the main consequence of using this mode is very logically the battery. The latter will melt like snow in the Sun during intensive use sessions with GT mode. We must therefore remember to deactivate the latter once the gaming sessions are over if we do not want to have a bad surprise with regard to the autonomy of the phone.

The realme GT Neo 2: the right pick for the mid-range?

The realme GT Neo 2 is presented as a flagship killer, a phone that offers very high-end features at a price two or three times lower. With an entry level at 439 €, the Realme Gt Neo 2 therefore acts as a very serious candidate for this title. But if the phone is more than complete, it still lacks a few small details to get closer to the bigger ones. The lack of IP certification is a real black spot for the phone. In addition, the sample rate of 600 Hz offers no real difference in everyday life. If in mobile games, the terminal demonstrates great capabilities, it is still too limited in photos to claim to compete with truly high-end models..

Xiaomi Redmi Watch 2 – The successor comes with some updates

The new smartwatches of the Fossil group have arrived

Ragnarok will not arrive until 2022, but with a PS4 version