A recent study by NordVPN reveals that the morning routine of the French is a far cry from the Miracle Morning.

A new study reveals that nearly half of French people (45%) start using their phone while still lying in bed. The majority of them do it to consult social networks. Smartphones accompany 54% of French people during breakfast, 48% also use it in the toilet, on their way to the office (33%), while making coffee or tea (31%) and talking to their partner, family or roommate (25%).

A digital morning routine that impacts the day

The younger generations seem to be the biggest users of smartphones in the morning. Just over three-quarters of Gen Z use their phones before getting up, followed closely by 68% of Gen Y. 45% of Gen X and 53% of baby boomers, on the other hand, prefer to get up in first.

Internet users who consult their terminals while they are still in bed tend to be more active users throughout the day: the telephone follows them more in their morning routine, they do more online activities and use more of applications. 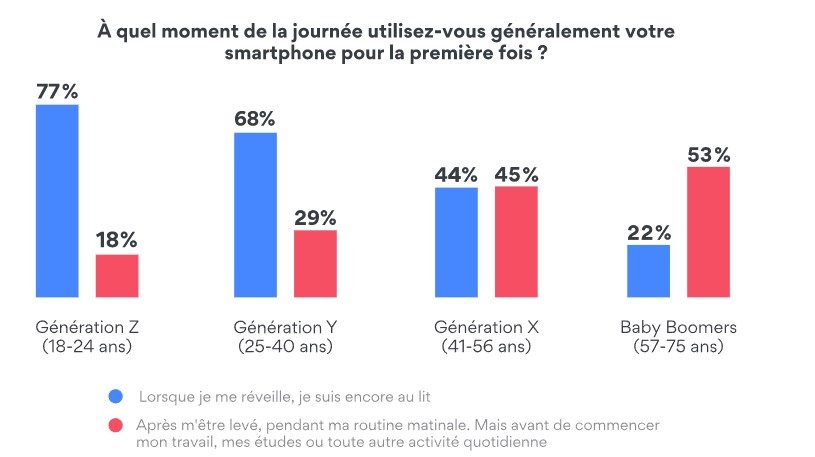 Popular social networks in the morning

Apart from those who use it to turn off the alarm clock (56%), the French most often use their smartphone to connect to social networks (49%). It remains one of the most popular activities for all age groups, with a downward trend among the youngest (56% of Gen Z) and the oldest (39% of baby boomers).

In addition, the French like to read and listen to the news, call or send messages (34% each) and listen to music or podcasts (18%).

Interestingly, a quarter of respondents said they started working while still in bed, for example by checking their work emails or messaging tools such as Slack, Microsoft Teams.

A morning without a smartphone? Unimaginable but beware of the risks

The French spend a third of their lives online. It is therefore not surprising to find that almost everyone is connecting to the digital world to start their day. Smartphones are unquestionably the most used (82%) in the morning. They are followed by television (35%), computers (33%) and tablets (20%).

“Even though 79% of French people fear being followed online and 51% believe they are being followed by cybercriminals, connected devices are an integral part of the lives of the majority of them. However, more connected devices means more security threats, as the Internet of Things (IoT) represents the biggest source of security problems. As a result, the web has become a virtual playground for hackers, ransomware developers and other types of fraudsters,” said digital privacy expert Daniel Markuson.

Freevee, the Amazon streaming service that used to be called IMDb TV

The Galaxy Watch 4 chip was introduced