Taking into account the speed with which information is shared in these situations, it will take a series of measures so that the platform does not give visibility to false information.

Twitter will apply special measures in times of crisis

When it happens, for example, a natural disaster, an armed conflict or a public health emergency, we often turn to Twitter for information, beyond any trusted news outlet.

The team of Twitter he knows this and wants the platform to be trusted when searching for information on such important topics. And to do so, it is implementing a “crisis disinformation policy.”

This policy guarantees that a series of measures will be taken to combat disinformation and ensure that reliable information is available. Yes ok Twitter It already has a moderation system, when these situations arise, the conversations arise quickly and are difficult to control.

To avoid this, one of the measures they will take will be to reduce the visibility of tweets that share false information and the interaction will be limited:

[…] As soon as we have evidence that a claim may be misleading, we will not amplify or recommend content that is covered by this policy on Twitter, including in the Home, Search and Explore timeline.

And on the other hand, a warning will be added to these tweets. That is, the tweet will not be deleted, but it will be hidden behind the warning. If the user insists on seeing the tweet, they will have to click on “View” to display the content. It is a dynamic similar to the one implemented when sensitive content is shared in a tweet. 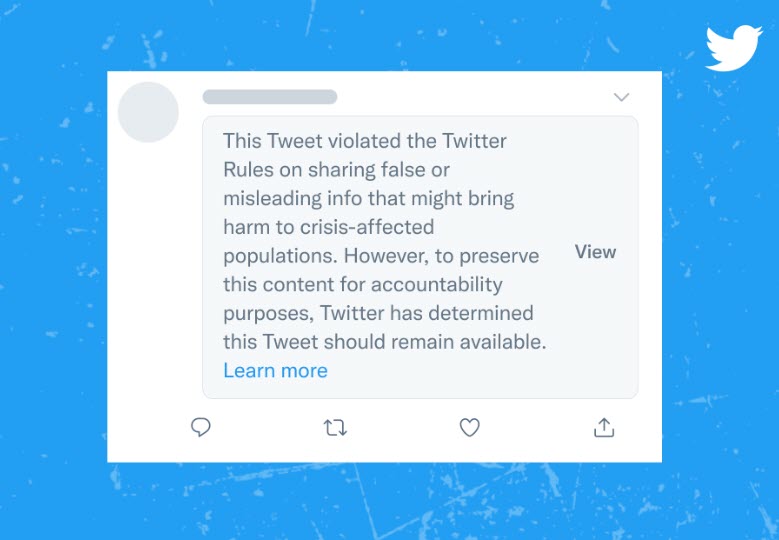 As you can see in the image, the warning will have a message like this:

This tweet violated Twitter’s Rules on sharing false or misleading information that could cause harm to populations affected by the crisis. However, to preserve this content for accountability purposes, Twitter has determined that this tweet must remain available.

The Twitter team mentions that it will pay special attention to high-profile accounts, such as the accounts of politicians, state-affiliated television stations, government institutions, among others.

Apple Watch Series 7 is already out in China

Action Monitor: The Poco X3 Pro has arrived at Telenor

Amphetamine, the app that Apple almost censored due to a misunderstanding